For as long as I can remember I have shied away from lambasting those who adhere to a political party’s ideology or follow its guidance over the cliff … just because party leaders tell ‘em to do it.

I can’t remain silent now as the Georgia runoff for the U.S. Senate approaches. My question is this: What in the world is wrong with Georgia Republicans who continue to stand behind the moron masquerading as a candidate for the Senate seat held by Democrat Raphael Warnock?

Herschel Walker is without question the most unfit, unqualified individual to run for the Senate in the past century. Hell, maybe ever!

And yet … we see political polls showing the race still in the neck-and-neck category.

My goodness! The list of disqualifiers for Walker is approaching the list that accompanies Donald J. Trump.

He preaches a strong anti-abortion stance, but has been accused by at least two women of forcing them to abort babies conceived by Walker himself. He stands as a “family guy,” but has nothing to do with many of the children he brought into this world. Walker claimed a tax exemption in Texas that goes to “primary residents” of this state … but he’s running for political office in Georgia. Walker recently spent several minutes on the stump mumbling nonsense about whether it’s better to be a vampire or a werewolf. Finally, Walker cannot speak with any semblance of intelligence about any serious policy matter.

Yet he continues to run close to Sen. Warnock.

This phenomenon makes me wonder out loud what I have kept to myself for virtually my entire adult life: Are grassroots Republican voters really that stupid?

But he’s showing a whole lot of it.

Consider that Walker is receiving a tax break for a “primary residence” in — hold on! — Texas, where he apparently still lives.

So, you may wonder: How does this former football star pull this off? He might not. The Texas Tribune reports that he might violating Texas tax law with this dubious homestead exemption based on his “primary residence.”

The dictionary, by the way, describes “chutzpah” as a Hebrew word meaning “utter gall.”

Here’s a thought that’s been kicking around the past day or so: Herschel Walker — who is in a runoff against Democratic U.S. Sen. Raphael Warnock — might be declared ineligible to run for public office in Georgia if he’s going to declare his residence to be in Texas.

I have referred to Walker as the nation’s premier dumbass. If what is being alleged is true, he is giving dumbasses everywhere a bad name. 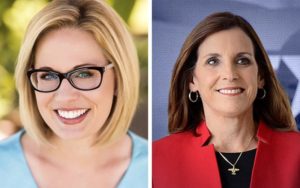 Meanwhile, way out yonder in Arizona, two candidates fought long and hard for a U.S. Senate seat now held by Republican Jeff Flake, who didn’t seek re-election. It came down to counting mail-in ballots. The Democrat, U.S. Rep. Kyrsten Sinema, won by a narrow margin. The Republican, fellow Rep. Martha McSally, did the noble thing and conceded. She wished her opponent “success.” The fight was over.

Oh, but wait. McSally might have an ulterior motive in showing such grace. Do not misunderstand me. I applaud her for taking the path she took.

GOP Arizona Gov. Doug Ducey might be appointing a successor to Sen. Jon Kyl, whom Ducey appointed to succeed the late John McCain in the Senate, Kyl might not want to serve the full term. He might retire from the Senate yet again; he served there once already.

McSally might be positioning herself for an appointment. That’s the buzz out west. Whatever the motive, McSally’s quiet and dignified concession — juxtaposed to what we’re witnessing back east — is a refreshing thing to witness.