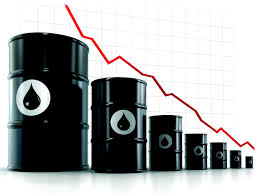 Oil prices were spiking. They surpassed $100 per barrel of crude. The price of gasoline also skyrocketed. It passed $4 per gallon in some parts of the country; it got nearly that high in the Texas Panhandle.

Who got the blame? President Barack H. Obama. His congressional critics, namely the Republicans, kept hammering the president over the price spikes. Why, they just couldn’t stomach the idea of watching these gas prices heading into the stratosphere and they had to blame someone. Obama was the target.

Automakers began making more fuel-efficient cars after they were bailed out partly with federal government stimulus money. Research on alternative energy sources ramped up. Other oil-producing nations’ economies began to falter, diminishing demand on fossil fuels around the world.

The price of oil today is less than $40 per barrel, less than half of where it was five years ago. The price of gasoline? Today in Amarillo, regular unleaded is being pumped at $2.26 per gallon in most stations.

Is the president getting the “blame,” let alone the credit, for any of this?

Not on your life.

UPDATE: The price of regular unleaded gasoline dropped another nickel per gallon since this item was posted. The hits just keep coming.

My wife and I deserve some of the credit — maybe just a teeny-tiny bit of it — for the falling gasoline prices in Amarillo and around the country.

I went to the service station Saturday morning to put gasoline into my hybrid car, the one that runs on electricity as well as gasoline. It’d been 16 days since I last put gas into my little Prius buggy. I filled it up. Total cost? $15.95. That’s it. I burned less than 6.5 gallons of gasoline for the past two-plus weeks.

Therein lies one of the causes of this downward slide of oil prices, which means the price of gas also is coming down. Gas prices in Amarillo today average about $2.39 per gallon of unleaded regular. That’s more than a buck a gallon less than what it was a year ago!

We aren’t alone. Others are doing the same thing, buying fuel-efficient cars, which burn less gas, which means less demand on oil supplies.

Then came word this past week that OPEC — that consortium of oil-producing countries — won’t cut production. I guess they figure there’s still money to be made pumping oil out of the ground. So, OPEC won’t manipulate the supply side of this equation, at least for the time being.

My wife and I are happy to be doing our part. Now, if only we could get the price of diesel to come down a bit more so we don’t feel guilty driving our big ol’ pickup — which is parked most of the time.

It’s a term I use to describe remote locations anywhere in the United States of America.

But today it more or less symbolizes a trend across much of the western United States — and it is a trend to which I am getting used.

Wyoming, Utah, Colorado and Idaho are just four western states that allow motorists to drive 80 mph on interstate highways. Part of the rest of the story is that I’m getting accustomed to it.

My wife and I have been flying low across some of these highways in recent days. Allow me to add that we’re doing this in a little bitty car, a Toyota Prius.

Before you chuckle, I’m going to add that the Prius — in the words of ol’ Dizzy Dean — can “pick ’em up and lay ’em down.” It moves … quickly.

We’ve enjoyed our time on the road, partly because we can get to our destinations more quickly than we could when speed limits were a “mere” 70 mph, let alone prior to 1995 when they were posted at 55 mph.

It’s taken me some time to get used to these speeds. But I’m there.

Part of my justification for driving so quickly is that the Prius is among the most fuel-efficient vehicles in existence. We’re averaging close to 50 miles per gallon on our journey, which is a lot better than virtually every other family car on the road today.

Back in the 1970s, when gasoline prices spiked after the infamous oil embargoes, Congress slowed everyone down to 55 partly to conserve fuel. Since then automakers have done a lot better job of manufacturing fuel-efficient vehicles. My wife and I own one of them.

So that gives us carte blanche to give the all-clear “flaps up” signal when we hit the road.

By golly, it’s rather fun getting places lickety-split.