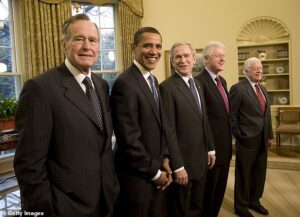 One of the more exclusive clubs on Earth currently comprises just five members. However, only four men are being allowed inside whatever passes for a clubhouse frequented by its occupants.

I refer to the Former U.S. Presidents Club. It once was a revered de facto institution. The men who once served as commander in chief occasionally would huddle together, talk among themselves, perhaps even offer some advice to the current president of the United States.

Four of these men seem all willing to engage in this kind of time-honored camaraderie. Then there’s the fifth former POTUS. No. 45 is wired so differently. It defies any form of logic to understand how the 45th POTUS — whose name I will continue to refuse to publish on this blog — ever can assimilate with his colleagues, all the men who once had the nuclear codes, who lent aid and comfort to the nation in grief, performed the myriad written and unwritten duties of the high office.

Jimmy Carter, Bill Clinton, George W. Bush and Barack Obama represent different political parties. Three of them are Democrats; one is a Republican. Even among the Democrats didn’t always walk in lockstep with each other. They all had a serious common thread that binds them at several levels. They all were humbled by the office. They all are true-blue patriots. They all carried themselves with dignity. They all accepted political defeat when fate turned against them.

Then there’s the fifth former POTUS.

He embodies none of that. He won’t accept publicly that President Biden defeated him. He continues to lie. He denigrates fallen heroes of past wars.

The most immediate past POTUS likely never will be welcome inside the Former Presidents Clubhouse. Why should he be welcome? The former Numbskull in Chief has worn out his welcome to the political arena. He continues to hurl insults and invective at all of the men who preceded him.

I wouldn’t object one little bit if the other POTUSes simply kept the clubhouse door locked to prevent No. 45 from entering it.