Some political and legal experts suggest that President Biden’s embarrassment over the discovery of classified documents in his home might forestall any effort to prosecute Donald J. Trump for the same thing.

Those who are suggesting Trump is in the clear had better check the record. The ex-POTUS is being investigated for a greater number of alleged misdeeds than just the document caper that involves his taking of classified documents from the White House as he was vacating the presidency.

Attorney General Merrick Garland well might forgo a criminal indictment on that case.

But wait! Trump also has the matter of inciting the 1/6 insurrection. He’s also facing a potential indictment in Fulton County, Ga., for pressuring election officials in Georgia to overturn the results of the 2020 election.

The dude is still lost deep in the criminal justice woods.

As for whether Donald Trump can still stand trial for violating federal law by squirreling away classified documents, I believe that is a real possibility.

The man’s troubles are just beginning. 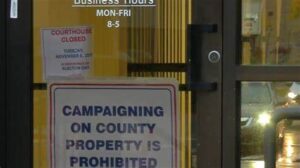 If I was a betting man — and I have to stipulate that I am nothing of the sort — I would wager that Donald J. Trump’s gravest threat to his future looms in the Fulton County, Ga., district attorney’s office.

The former president is under investigation in many venues: Congress, the Justice Department, Manhattan (N.Y.) and Fulton County.

It’s the Georgia matter that, to my way of thinking, presents Trump with his most serious threat. Why? Because the whole world has heard Trump’s own voice demand that Georgia Secretary of State Brad Raffensberger “find” enough votes to swing the state from Joe Biden’s column to Trump’s.

Where I come from, I believe that amounts to a clear-cut, no-questions-need-asking, tried-and-true case of election tampering.

Oh, and there’s more to that recorded conversation. You might recall that Trump actually threatened Raffensberger with criminal prosecution if he didn’t do what the president wanted him to do.

I have been wondering ever since I heard about this: If this doesn’t constitute a crime, then what in the world qualifies?

Fulton County District Attorney Fani Willis is pursuing this probe with all appropriate vigor. Indeed, I have thought all along that this case presented Trump with his most daunting set of allegations. What’s more — thanks to Raffensberger, who thought to record the phone conversation — we can hear the POTUS in his own voice pressuring the election official to, shall we say, “steal the 2020 presidential election.”

The House select committee that is pursuing the insurrection also is piling up a mountain of evidence that suggests criminality within the White House. The Manhattan probe, though, appears to be losing steam. The Justice Department probe? Well, Attorney General Merrick Garland has made it abundantly clear that “no one is above the law” and by “no one,” the AG means, well … no one.

If I were Donald Trump — and I am so glad that I ain’t — I would be sweatin’ bullets over what might be coming his way from Deep in the Heart of Dixie.