The election deniers who continue to yammer about “theft” of elections and the rigging of outcomes that deliver losses to Republican candidates simply baffle me.

I do not understand how this alleged “rigging” is supposed to work. In Arizona, the election denying GOP candidate for governor, Kari Lake, refuses to concede that she lost to Democrat Katie Hobbs. Republican county officials in Cochise and Mojave counties refuse to certify the results because, they allege, of irregularities in the balloting.

This is nonsense. It is foolishness. It is dangerous.

These believers in The Big Lie have declared war on our democratic process. They cannot be allowed to spread their lies and do potentially irreparable harm to our cherished republic.

Kari Lake has just joined the roster of fellow deniers of the 2020 presidential election.

That is, she’s now a loser, having been defeated for the Arizona governor’s office by Democrat Katie Hobbs, who served as Arizona secretary of state and presided over the election that helped send Joe Biden to the White House.

Oh, did I mention that Lake had been endorsed by the man President Biden defeated in 2020, Donald John Trump? Well, you knew that.

Lake has been ardent denier of the truth, which is that Biden won a free, fair and legal election. Lake has been among the Big Liars who have alleged widespread voter fraud that did not exist.

Well, may this defeat signal the end of her presence on the national political scene … along with all the other liars.

Kari Lake is trailing in her bid to become Arizona’s next governor. Doug Mastriani lost his effort to be elected governor of Pennsylvania. Blake Masters is losing in his bid to become senator from Arizona.

Oh, let’s not forget that Lauren Boebert is losing her re-election bid to the U.S. House from Colorado.

What do these nimrods have in common? They are election deniers who contend that Donald Trump actually won the 2020 presidential election, despite tons of evidence that he, um, lost to Joe Biden.

They among other election deniers are meeting the same fate at voters’ hands. They are falling short in their grasping at power and their effort to overturn the results of a free, fair and legal election.

The three individuals I cite are Republicans (of course). They all are loyal to the Election Denier in Chief, Donald John Trump. None of them deserves to be elected to anything.

May their struggles continue.

By any reasonable measure, Democratic Lt. Gov. John Fetterman should be elected U.S. senator from Pennsylvania in a few days.

His opponent in the midterm election is a former physician, Mehmet Oz, who boasts not one moment of public policy experience. Furthermore, Oz doesn’t even live in the state he allegedly wants to represent in the Senate.

As I write this brief blog post, Fetterman is running slightly ahead of Oz in the polling. Why is that? Because Oz and his Republican allies — led by Donald J. Trump — have made a stroke that Fetterman suffered a few months ago a campaign issue.

Has Fetterman lost any mental acuity? Is he less smart now than he was before the stroke? No and no. However, he has suffered what he admits to are “auditory” issues. He has trouble stringing sentences together.

I want to mention all this because of the nastiness that permeates the campaign to succeed retiring GOP Sen. Pat Toomey. The result of this election well could determine which parties controls the Senate in January; the Senate now is split 50 to 50. It’s a big deal, man!

I would hate for this campaign to turn on one side’s tittering over a serious man’s cognitive ability … which hasn’t diminished because of a stroke.

However, the cheapness of debate is exemplified in this contest and others featuring campaigns that include election denying/MAGA-loving Republicans and their Democratic foes.

That is what is playing out in Pennsylvania. It should not have come to this, with the result of a contest between a tested public policy veteran and a fraudulent carpetbagger now being too close to call.

LAVEEN VILLAGE, Ariz. — I guess it was the late Sen. Lloyd Bentsen who I heard say that in Texas, “politics is a contact sport.”

Yes. It is. However, a brief visit to a real-deal battleground state such as Arizona has exposed my bride and me to what has become a “contact sport” that can draw a good bit of metaphorical blood.

Arizona is where Donald Trump sought to delegitimize his loss to Joe Biden in the 2020 presidential race. It has carried over to the midterm election, where the ballot in Arizona is peppered with election deniers seeking to overturn the results of the election that President Biden won freely, fairly, legally and morally.

My favorite commercials happen to be those featuring Republican voters who say that GOP governor candidate Kari Lake is “too dangerous” to become the state’s next governor.

I am ready to cast my ballot and then get on with the rest of retirement living. 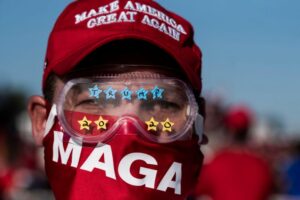 I am trying like the dickens — with everything I can muster up — to be optimistic about the midterm election.

Except that those damn public opinion polls are showing an alarming — and frightening! — trend out there. It is that the election deniers, the MAGA Republicans, the Trump cult followers are faring shockingly well among voters prior to the balloting.

I am thinking about the race for Arizona governor, where MAGA fruitcake Kari Lake holds a slim lead over Democrat Katie Hobbs.

Hobbs is the secretary of state. Lake has vowed to “overturn” the results of the 2020 presidential election and work to return Donald Trump to the presidency he lost during that election. President Biden won Arizona by roughly 11,000 votes. The MAGA goons brought in those phony election analysts to perform a “forensic audit” of the 2020 balloting and, guess what … they found that Biden actually won the election.

That ain’t good enough for Kari Lake and other MAGA goons who support.

She’s not the only one. We have that MAGA moron in Pennsylvania, Doug Mastriani, pledging the same thing if he beats Josh Shapiro to be that state’s governor.

I cannot help but believe that if the MAGA wing of the Republican Party carries the day in these key elections that this country is in a serious world of hurt.

And what in the world is all this going to deliver for the 2024 election and the result it produces? If the election deniers hold public office, they promise to finish what the 1/6 insurrection effort sought to do after the 2020 election: overturn the result.

Are we really and truly prepared to walk down that path?

Man, if we are, then we are in much worse trouble than any of us ever imagined. 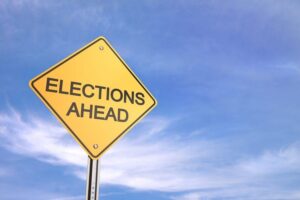 I remain concerned, but not yet frightened, over the prospect of Democrats working overtly to help nominate MAGA-loving, election-denying, fruitcake Republicans to high public office.

It’s going on all across the country, with Democrats contributing actual cash money and casting actual votes for Republicans believing that nominating the weakest candidates guarantees a victory for Democrats this fall.

Not so fast, folks.

This is a game fraught with peril.

What in the world is going to happen if voters actually elect these election deniers to, say, governorships? There are individuals on some state ballots who promise to overturn the results of the 2024 presidential election if the “wrong” candidate wins. These are the folks Democrats are helping win their party’s nomination. Holy cow!

This kind of electoral tomfoolery can work. It also can backfire.

It’s the kind of act that makes me nervous.