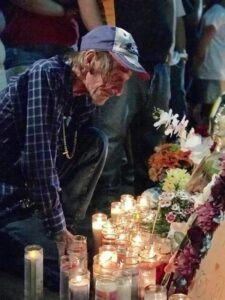 I had been searching for the symbolic meaning of a man whose wife died in the El Paso slaughter of 22 victims at the Walmart shopping center the other day.

Then it came to me. Anthony Basco has no surviving family members left. He was left to grieve alone when the lunatic gunman opened fire at the Walmart. Basco’s wife, Margie Reckard, was among the victims. Her husband had been putting flowers daily at the memorial erected in front for the store where the carnage took place. He has been living in his car in the parking lot of the store. Basco refuses to leave the memorial site.

Basco then invited the public to his wife’s funeral. And, oh brother, how the public responded.

More than 1,000 former strangers showed up to pay their respects to a woman they didn’t know and to cloak her grieving husband in the love he deserves to receive.

What is the moral of this tale? It is, to me, that love is far stronger than hate. The shooter who opened fire at the Walmart had declared war against Latin American immigrants. I do not know how Margie Reckard fell into that realm, but she died.

My point is that no matter how violent and vile hatred is expressed and no matter how many lives such hatred takes with it, love will emerge.

Anthony Basco is feeling the love of a community that is grieving right along with him.

I think this also symbolizes the meaning of “El Paso Strong.” 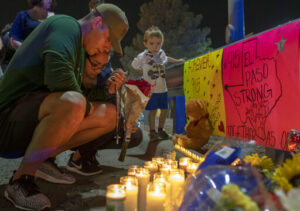 A community in far West Texas is reeling. Twenty-two people died over the weekend at the hands of a madman who opened fire at a Wal-Mart shopping center.

I am struck by a couple of elements about that community’s response to what befell it.

One is the insistence among many public officials, community leaders and even some in the media that the shooter does not live in El Paso. They have pointed out repeatedly that the killer allegedly drove six-plus hours to El Paso from Allen, Texas, just north of Dallas. He stopped at the Wal-Mart, reportedly sized up the situation and then re-entered the store to open fire.

Former U.S. Rep. and El Paso native Beto O’Rourke, who’s running for president, has insisted that El Paso is among the safest cities in the country. He has noted how its proximity to Juarez, Mexico, creates a metropolitan area of more than 2 million residents. He said over the weekend that the death toll at Wal-Mart exceeded the average annual murder rate in El Paso.

And so the beat goes on, with residents still looking for answers, for relief from their mourning and seeking to tell us that the killer isn’t one of them. He came from far away to do grievous harm.

The other is the “El Paso Strong” memorabilia that has cropped up. El Paso is trying to exhibit a common bond forged in tragedy. The same can be said of Dayton, Ohio, which experienced a similar tragedy later that day. A gunman killed nine people in the span of about 30 seconds before Dayton police killed him in a fire fight. The Dayton killer’s motives aren’t as discernible as the individual who allegedly killed those in El Paso.

The apparent hatred the El Paso killer has for Hispanic immigrants has helped bond the community together.

None of this cures the intense pain they are feeling in El Paso. However, if the sense of unity it brings to a grieving city helps it fight through its pain, then we all should join in declaring ourselves to be “El Paso Strong.”

Our hearts will take time to heal from the wounds delivered by the gunmen in El Paso and Dayton. We should stand with our fellow citizens — and with their neighbors — in solidarity.