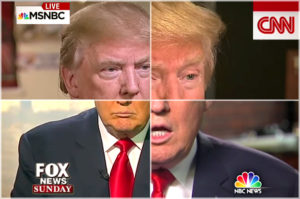 Douglas Brinkley and I are on the same page, we’re singing off the same song sheet, we are of like minds.

There. I don’t intend to cast myself as a knowledgeable presidential historian in the mold of Brinkley, but he has said out loud what many of us across the land have believed all along.

It is that Donald John Trump Sr. is “unfit for command.” He is not fit to hold the office he occupies. The president of the United States is in hopelessly over his head, out of his depth.

The basis for Brinkley’s harsh analysis lies in the “chaos” that pervades the White House. Brinkley points specifically to Anthony “Mooch” Scaramucci, the newly named White House communications director. Mooch has managed to accentuate the chaos by virtue of that hideous, profane interview he gave to The New Yorker in which he described former White House chief of staff Reince Priebus — and I hate using this terminology — as a “f*****g schizophrenic, a paranoiac.”

I must point out that Priebus was still the chief of staff when Mooch made that ghastly assessment. The president booted Priebus out of his job a few days later.

What kind of head of state and head of government allows an underling to use that kind of language in public to describe a fellow federal staff member? What kind of man tolerates that kind of behavior?

Oh, wait! It’s the kind of man who said years ago that he has grabbed women by their genitals; he has said Sen. John McCain was a “war hero only because he was captured” by the enemy during the Vietnam War; he is the individual who mocked a disabled journalist; he is the candidate who thinks nothing of lying and of defaming political opponents; he is a president who calls the media “the enemy of the American people.”

Many of us have believed all along that Trump is “unfit for command.”

And as the Wall Street Journal reports, her task is to make her “likable enough” to get elected president of the United States next year.

As the WSJ reported: “She needs to try to humanize herself, because in some ways she’s kind of become a cardboard cutout figure,” said Douglas Brinkley, a history professor at Rice University.

So, the campaign begins anew for the former first lady, senator and secretary of state.

Many in the media refer to her simply as “Hillary.” Just a mention of that name and you know to whom the reference is being made. Does the first-name familiarity make her likable? Hardly. I continue to believe she needs to translate likability into authenticity.

She remains a political powerhouse. The strength, though, doesn’t always connect with voters in a tangible manner. Clinton at times appears evasive, which hardly lends itself to likability.

I will be among millions of voters looking for signs that she’s capable of understanding the problems, worries and concerns of average American citizens. If she does, she’ll prove she’s for real, that she’s authentic.