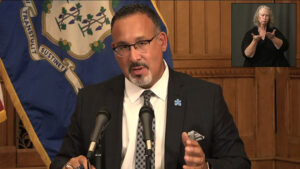 Imagine that, if you dare.

President-elect Joe Biden has presented to the nation a nominee for education secretary with actual knowledge, experience and appreciation for public education. Let this soak in for a moment.

Connecticut education commissioner Miguel Cardona is Biden’s pick to lead the U.S. Department of Education. Cardona would replace Betsy DeVos, who — to be charitable — knows nothing about the public school system she was nominated to lead in 2017.

I welcome this nomination. 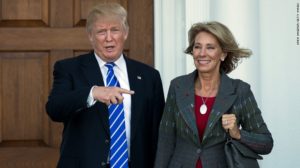 It’s no wonder at all that Betsy DeVos needed a historic vice-presidential vote in the U.S. Senate to get her confirmed as the secretary of education.

You want evidence of it? Check out the “60 Minutes” interview that aired Sunday night.

DeVos’s confirmation in 2017 ended with a 50-50 tie in the Senate; Vice President Pence cast the tie-breaking vote to confirm her nomination by Donald John Trump.

Oh, brother, she stumbled and bumbled her way through the interview with CBS News correspondent Leslie Stahl.

She actually acknowledged that she hasn’t visited “underperforming schools” to see for herself why they are in such bad shape. “Maybe I should,” DeVos told Stahl.

This is the person the president chose to administer our public education system? Give me a break.

As the Washington Post reported: The secretary also said she is “not so sure exactly” how she became, as Stahl described her, “the most hated” member of President Trump’s Cabinet but believes that she is “misunderstood.”

I am not among those who hates DeVos. I am deeply concerned that this individual who has zero knowledge or experience relating to public education has been put in charge of the agency that is supposed to advocate on behalf of public schools, students and teachers.

I encourage you to take a look at the exchange between Stahl and DeVos contained in the link that follows. Check it out here.

Yep, this is one of the “best people” Donald Trump pledged to populate his presidential administration.

I want to give a full-throated cheer to a former colleague of mine who has gone on to do some great work in public education classrooms.

Shanna Peeples, who was named 2015 National Teacher of the Year, these days works in the administration of the Amarillo Independent School District. Until this school year, she taught English at Palo Duro High School. She was named National Teacher of the Year and was feted in a White House ceremony hosted by President Barack Obama. We worked for a time together many years ago for the same newspaper, the Amarillo Globe-News.

What has Peeples done to earn praise from yours truly? She has invited the current education secretary, Betsy DeVos, to visit Amarillo. Come see what’s going on here, Shanna has told DeVos.

Lord knows the education secretary could use some on-site experience visiting public schools, talking to educators who work for public school districts and to public school students.

Peeples made her invitation known on social media. She has said she’ll bring the “coffee and donuts” to a meeting with Secretary DeVos.

I want to join the one-time National Teacher of the Year in inviting DeVos to Amarillo.

Look at it this way, Mme. Secretary: Amarillo sits in the middle of the Texas Panhandle, which voted overwhelmingly for the guy who nominated you, Donald J. Trump. This is ostensibly friendly territory. Amarillo ain’t Berkeley, if you get my drift.

DeVos, though, has zero experience with public education. Not as a student, or the mother of students. She ought to come here and take a look at the work being done by those who work for the very public to which the secretary also answers.

Nice going, Shanna. I hope the secretary accepts your invitation. 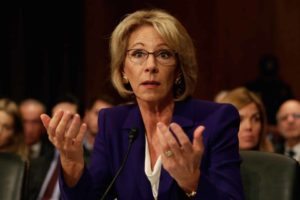 Betsy DeVos is going to assume her new job in the federal government with one of two outlooks.

The first one suggests that with a 50-50 vote in the U.S. Senate to confirm her — and with the vice president of the United States casting the tie-breaking vote — DeVos is assuming the education secretary job with virtually no mandate to do anything.

Half the Senate opposes her. The president who nominated her got nearly 3 million fewer votes than his 2016 election opponent — while winning enough electoral votes to become president. The vice president cast the first in history tie-breaking vote to confirm a Cabinet nominee.

Or, she’ll thumb her nose at those of us who opposed her confirmation and say, “Hey, winning by an inch is as good as winning by a country mile.  So … get over it!”

I suspect she’ll adopt the latter point of view.

Senate Democrats gave it their best shot, trying to talk for 24 hours straight on the Senate floor seeking to persuade one more Republican to follow the lead of GOP Sens. Lisa Murkowski and Susan Collins, who voted against DeVos’s nomination.

She gave a lot of money to Republican politicians, which I guess is qualification enough. 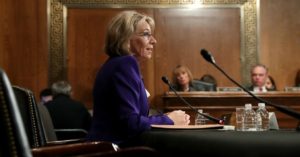 I know it’s still a long shot, but I am going to implore the U.S. Senate to “just say ‘no'” to “Billionaire Betsy” DeVos as the next secretary of education.

Just as I believe Donald J. Trump is still unfit for the presidency, he has chosen an equally unfit individual to lead the nation’s public education program.

I emphasize the word “public” for what I believe is a valid reason.

She was educated in private schools. Her children have attended private schools. DeVos has talked openly about creating a voucher program for parents, allowing public tax money to subsidize the private education of their children.

The president can do far better than to nominate someone other than DeVos, whose only “qualification” has been the large amounts of money she has raised for Republican politicians — including the president himself.

Two Senate Republicans — Lisa Murkowski of Alaska and Susan Collins of Maine — have said they won’t vote for DeVos. That puts the count at 50-50, assuming all Democrats and the two independents who caucus with them, vote against DeVos.

Will there be another Republican senator with a conscience who’ll realize that the president has made a mistake in nominating this know-nothing to run the Education Department.

I am hoping one can emerge.

Then the president can look for someone who knows something about the agency he or she would lead. 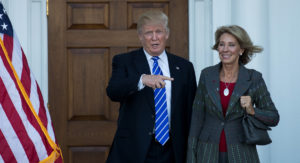 Donald J. Trump’s choices for many of his Cabinet positions are provoking the kind of response the president-elect might have expected, but might not welcome.

His pick for secretary of education ranks as one of the weirder choices.

Her name is Betsy DeVos. She’s really rich. She gave a lot of money to the Trump campaign, thus making this appointment look more like a political choice than one steeped in intimate knowledge of public education policy.

What’s her education background? Well, I cannot find it.

If the president-elect would ask me — which he won’t, of course — I’d tell him that he needs an advocate for public education to fill the key post of secretary of education.

Betsy DeVos appears to be anything but an advocate. She’s a foe of public education.

It brings to mind a conversation I had many years ago with a public school district trustee in Beaumont. The late Howard Trahan sent his kids to private schools, yet he served on the publicly run Beaumont Independent School District. I asked him once — on the record — whether that presented a potential conflict for the elected member of the Beaumont ISD board of trustees. He became angry with me and he told me that his kids enrolled in private schools because it was “their choice.”

I’m unsure now how the new education secretary-designate is going to calm the concerns of those of us who believe in public education and whether she is the right person to be its latest steward.

I hope someone on the U.S. Senate panel that will decide whether to confirm her appointment asks DeVos directly: How does your lack of direct exposure to public education prepare you for this highly visible job as secretary of education?