The collective voices of wisdom are starting to be heard as Donald Trump continues his insane effort to cling to power.

Those voices belong to 10 former secretaries of defense who, at the urging of one of them, published a letter to the Washington Post decrying any possibility that Trump would deploy troops to become involved in a domestic election dispute.

Dick Cheney, who served as vice president under George W. Bush  and defense secretary under George H.W. Bush, reportedly instigated the letter. The document was signed by the likes of former secretaries James Mattis and Mark Esper — two men who served in the Trump administration — as well as Donald Rumsfeld, William Cohen, William Perry and Chuck Hagel. Republicans and Democrats locked arms to offer a clear warning to Donald Trump, who is now just 15 days from exiting the presidency.

They wrote, according to National Public Radio:

“Our elections have occurred. Recounts and audits have been conducted. Appropriate challenges have been addressed by the courts. Governors have certified the results. And the electoral college has voted,” the ten men from both Republican and Democratic administrations, wrote.

“The time for questioning the results has passed; the time for the formal counting of the electoral college votes, as prescribed in the Constitution and statute, has arrived,” they said.

Will this message sink into that vacuous skull perched atop Donald Trump? If not, it damn well should.

These men served our nation with honor. Their words need to be taken seriously.

“Acting defense secretary Christopher C. Miller and his subordinates — political appointees, officers and civil servants — are each bound by oath, law and precedent to facilitate the entry into office of the incoming administration, and to do so wholeheartedly,” they wrote. “They must also refrain from any political actions that undermine the results of the election or hinder the success of the new team.” 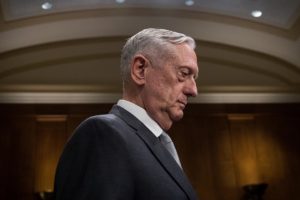 This is the least surprising development in the days since Defense Secretary James Mattis announced his resignation from the Trump administration.

Donald Trump has told the defense boss to hit the road at the end of next week; don’t bother waiting until the end of February.

The president appears to be angered over Mattis’ rebuke of him in his letter of resignation. It’s an unprecedented dismantling of the president’s approach to foreign and defense policy. What’s more, the letter lacks a single word of appreciation for the service Mattis rendered to the president himself, although Mattis does restate his pride in serving the men and women in uniform.

Accordingly, Trump decided to give Mattis an extra push out the door. If you think about it, that is an understandable reaction from the president, given the tone and tenor of the letter that Mattis delivered in announcing his resignation.

It does not diminish or degrade the essence of the concerns that Mattis raised in declaring his intention to depart from his post as defense secretary.

So now the Trump administration will have an acting defense secretary, Patrick Shanahan, to go along with an acting White House chief of staff, an acting Environmental Protection Agency administrator, an acting interior secretary, an acting attorney general and,  um, no ambassador to the United Nations.

This is not a “fine-tuned machine.” 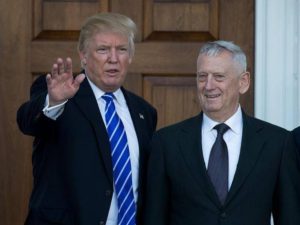 I’ve made this point already, but I feel the need to restate it.

Donald J. Trump once again referred to the secretary of defense as “Gen. Mattis.” Yes, James “Mad Dog” Mattis — one of my favorite Trump Cabinet appointees — is a retired Marine Corps general. He’s got four stars on his epaulets.

But that was then. Today, the here and now, Mad Dog Mattis is a civilian, just like the president is a civilian.

Trump’s reference to “Gen. Mattis” came as he was announcing his decision to sh**can the planned June 12 summit with North Korea’s Kim Jong Un. The president, naturally, followed that reference with a statement that the U.S. military is the strongest in the world and that it is ready to act if the need arises.

Mr. President, we assign these Cabinet posts to civilians. It’s a time-honored tradition that civilians control the military. President Truman had to remind Army Gen. Douglas MacArthur of that fact when he relieved him of his Korean War command in the early 1950s.

I know it’s a semantics issue. It just bothers the daylights out of me that the commander in chief cannot honor the long-standing tradition of the office with a simple reference to the defense boss as “Secretary” James Mattis.

Get with the program, Mr. President.

I am going to quibble briefly over something I keep hearing from Donald J. Trump.

The president keeps referring to the secretary of defense, James “Mad Dog” Mattis, by his former title. He once was a Marine four-star general. He’s a combat veteran who’s quite proud of his service to the country. I happen to be a fan of “Mad Dog” Mattis.

However, he’s no longer in the Marine Corps. Yeah, yeah. I know: Once a Marine, always a Marine. Blah, blah, blah.

He is a civilian. I want the president to refer to James Mattis as “Secretary Mattis,” which would reflect the principle of civilian control of the U.S. military.

Trump recently made the reference while discussing the deployment of National Guard troops along our southern border.

“Mad Dog” Mattis no longer wears a uniform to work, Mr. President. He wears suits and ties, just like you do.

So, please refer to him by his current title of “Secretary” Mattis. 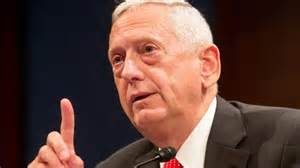 Let me see a show of hands. Who among you ever thought that a man with a nickname “Mad Dog” would emerge as a reasoned, thoughtful and nuanced secretary of defense?

Retired Marine Corps Gen. James “Mad Dog” Mattis has emerged as just that person. I want to sing the praises of the defense secretary, who over the weekend had the courage to speak reasonably — and in direct contradiction — to a reckless declaration that the president of the United States had made.

Mattis made a quick trip to Iraq and proclaimed that the United States will not seize Iraqi oil. Donald J. Trump famously said he intended to do that very thing if he were elected president. The idea, Trump said, was to deprive the Islamic State of the revenue it gleans from oil to fund its terrorist activities.

Mattis is becoming arguably my favorite Cabinet official in the Trump administration. Heaven knows that there aren’t many of them for which I would express such admiration.

It is reasonable to wonder if Mattis is going to last for the duration of Trump’s term. Trump is known to be an impulsive, not terribly thoughtful individual. He says things that pop into his noggin without ever considering the consequences of what he says.

Seizing the Iraqi oil fields was one of those ill-considered statements. Ain’t no way we can do that cleanly and without shedding a lot of American blood.

Mattis, career military man that he is, understands a lot more about such matters than the commander in chief. I am delighted, too, that he is expressing himself with the confidence that those general’s stars have given him.

Thank you for your service, Gen. Mad Dog. Keep up the good work … if the president will allow it. 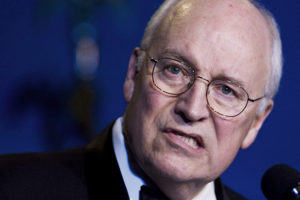 Is it me or does anyone else wonder what’s become of Dick Cheney?

The former vice president — from 2001 to 2009 — has been so very quick since leaving office to jump back into the political fray. He’s been critical of President Obama’s foreign policy, of Vice President Joe Biden, and oh yes, of former Secretary of State Hillary Rodham Clinton.

Well, the Republicans have their nominee. Donald J. Trump — who appears to be a classic Republican In Name Only — is now doing political battle with Democratic nominee Clinton.

But wait a sec, man? Cheney’s been nowhere.

I think I might have a clue. It’s because two of his former bosses, President George W. Bush and President George H.W. Bush — whom Cheney served as defense secretary — can’t stomach Trump’s candidacy. They despise the man for the way he’s run for the presidency, not to mention for the way he brutalized John Ellis “Jeb” Bush — W’s brother and Poppy’s son — during the 2016 GOP primary.

Whatever, the Bush family’s loathing of Trump seems to have silenced a loyal Bush guy.

Don’t misunderstand me here. I don’t necessarily want to hear from the former vice president. It’s not that I find his political world view all that appealing.

I guess I’m just miffed that Dick Cheney’s silence had robbed me of some material on which to respond.

When a Republican curmudgeon like Sen. Jim Inhofe of Oklahoma says he would vote for a Democratic nominee for defense secretary, then you might expect the next nominee to have a relatively clear path toward confirmation.

Today, President Obama is going to nominate former deputy defense secretary Ashton Carter to run the Pentagon; he would replace outgoing Secretary Chuck Hagel. He’s been highly decorated and has been confirmed already by the Senate for his one-time post.

Carter is a well-known expert on weapons and their procurement. He knows the ropes inside the world’s largest office building and it appears he’s got support from at least one Republican senator who’ll get a chance to vote on his confirmation. Will there be more?

GOP lawmakers have been making a lot of noise lately about blocking Obama appointments as payback for his executive action on immigration. They’ve been careful to exclude national security posts from that petulant game.

If there was a federal agency that needs leadership and cohesion in this troubled time, one would expect it to the be the Department of Defense.

Do not dilly-dally on this one, senators.