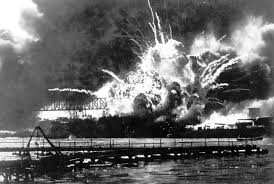 Seventy-four years ago today, airplanes swooped in over Honolulu and bombed the U.S. Navy base at Pearl Harbor.

Battleship Row was decimated. The pilots in those planes then took aim at Hickam Field, where the U.S. Army had a substantial air base. More destruction followed.

Japan had committed an act of war against the United States.

The next day, President Roosevelt stood before the Congress and asked for a declaration of war. He got it by the end of the day.

War was a simpler endeavor back then.

One nation attacked another. The victim of that attack then declared war; the nation that did the attacking declared war right back. Both nations mobilized and sent young service personnel to the battlefield to fight it out.

Yes, we remember Pearl Harbor today as a “date which will live in infamy,” as FDR told us.

All told, the United States put 16 million men and women into uniform during that terrible period. Last I heard, there were around 2 million of them left.

We owe them everything. Our freedom. Our way of life.

Is a declaration of war possible now, in this era when we’re waging a conflict with an elusive force that stops at nothing to kill innocent victims — in the name of what they call “religion”?

I believe it is. The current president, Barack Obama, has asked Congress for what amounts to a war declaration. He wants a vote to “authorize” continued warfare against an enemy that has committed acts against us that are — in FDR’s words — every bit as “dastardly” as the attack on Pearl Harbor.

War, though, isn’t as simple now as it was then. Politics has gummed up our national resolve.

Still, we ought to keep those brave warriors — the living and those who have passed from the scene — who answered their nation’s call to arms more than seven decades ago in our thoughts today.

Their nation rallied behind them and crushed the tyrants who sought to bring so much harm to the world.

I’ve been struggling with this story since I first heard about a couple of days ago.

The Pentagon is going to exhume the unidentified remains of more than 400 sailors and Marines who died on Dec. 7, 1941 aboard the USS Oklahoma, one of several warships sunk in the sneak attack that brought the United States into World War II.

I cannot decide if it’s totally necessary to use DNA technology that’s now available to identify the remains that have been resting in peace in “unknown” graves since “the date which will live in infamy.”

Their remains were reburied in a Honolulu national cemetery in 1950. Some of the remains reportedly were “co-mingled” with others’ remains. So it’s not clear who’s buried in each of the graves.

I understand that the technology now available will allow — through painstaking work — forensics experts to identify the remains. It will take time, perhaps years, to finish the job. Indeed, the family members deserve some closure and identifying the remains will give it to them.

However, the family members of the 429 sailors and Marines who were lost have known they were lost aboard the Oklahoma when it capsized at its mooring after being hit by enemy bombs and torpedoes.

Does it do any good now to exhume those remains and subject them to meticulous DNA research?

Why not simply let those heroes rest in peace?

I’m open to comments on this one. Your thoughts? Please?

Kaname Harada once fought against the United States of America.

He was a Japanese fighter pilot. He’s 98 now. Frail. Near the end of the line … apparently.

Harada has some wisdom for his government, one that sent him and other young warriors to fight in World War II: Don’t get involved again, ever, in war.

Harada is concerned that Japan might rewrite its constitution to allow its fighting forces to deploy abroad. Prime Minister Shinzo Abe is thinking about revising the document, which prohibits Japanese armed forces from doing anything other than protecting the island nation from attack.

Abe was incensed at the Islamic State’s brutal murder of two Japanese journalists. Indeed, the world was incensed.

He ought to heed to advice of an aging Japanese Zero pilot.

Harada spoke recently to an audience about his experience in WorAS ld War II. They were enthralling and chilling all at once. According to the New York Times: “Nothing is as terrifying as war,” he began, before spending the next 90 minutes recounting his role in battles, from Japan’s early triumph at Pearl Harbor to its disastrous reversals at Midway and Guadalcanal. “I want to tell you my experiences in war so that younger generations don’t have to go through the same horrors that I did.”

Indeed, I have learned in recent years that the U.S.S. Arizona Memorial at Pearl Harbor is attracting aging Japanese warriors who are coming to the United States to pay their respects at the memorial that stands over the sunken hulk of the battleship sunk during the Dec. 7, 1941 attack — which brought the United States into the world war. These men are now getting old, just as our brave men and women are aging. They were following orders and doing their duty as they saw it.

As Harada told the Times: “I fought the war from the cockpit of a Zero, and can still remember the faces of those I killed,” said Mr. Harada, who said he was able to meet and befriend some of his foes who survived the war. “They were fathers and sons, too. I didn’t hate them or even know them.”

This old man’s wisdom is profound. It is gripping. It needs to be heard by all those who believe war ever is a sane option to any dispute between or among nations.