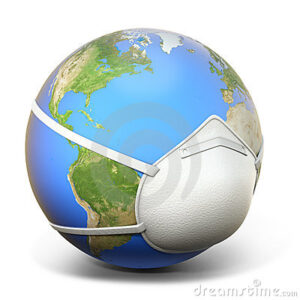 If you want a crystal-clear example of just how petulant partisan politicians can get, you need look no further than than the Dallas County Courthouse.

That was where County Judge Clay Jenkins ordered a fellow county commissioner on Tuesday to leave a meeting because the commissioner wouldn’t follow the rules laid down by the county board’s presiding officer. That would be Jenkins.

The county judge, who happens to be a Democrat (that’s important in this context; I’ll explain in a second) said all persons attending the commissioners court meeting needed to wear a mask to prevent the spread of the COVID-19 virus, which is spiking in Dallas County. Commissioner J.J. Koch — a Republican — refused to wear a mask. He said Jenkins doesn’t have the authority to overrule a mandate by Gov. Greg Abbott (another Republican), who says local jurisdictions cannot enforce mandates that are not spelled out by the state.

Koch resisted requests from Jenkins repeatedly. Jenkins finally had Koch removed from the meeting under escort by a sheriff’s deputy. Koch, meanwhile, says he is going to sue Jenkins.

Good grief! I cannot believe this is happening!

The courthouse snit illustrates quite clearly the partisan divide that is driving this discussion. Republicans by and large are refusing to heed government orders to take care against the virus; Democrats are heeding those orders. Thus, the divide widens.

The county judge is seeking to protect his fellow public officials, not to mention the public, from getting infected by a virus that is still making people sick. I just have to wonder whether Koch is resisting the order because it is coming from a colleague who happens to be a member of the opposing political party.

Koch is picking a fight he need not pick, for God’s sake!

From my vantage point in the next county over from Dallas County, J.J. Koch is making an unnecessary spectacle of himself and highlighting — or lowlighting, if you prefer — the partisan divide that has infected (no pun intended) a matter involving public well-being. 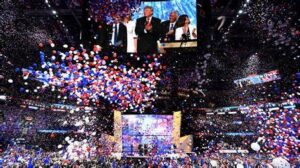 Donald John Trump is looking across the nation for a place to stage a political convention that will nominate him for a second term as president of the United States.

He faces a monumental task.

Trump has all but pulled the Republican National Convention out of Charlotte, N.C., because North Carolina Gov. Roy Cooper cannot guarantee that the RNC can conduct a convention packed with screaming Trumpsters. Why? Too much danger from the COVID-19 pandemic.

Trump isn’t having it. He wants to take it to a more politically friendly place, given that Gov. Cooper is a Democrat.

I chuckled out loud this morning when I read the Dallas Morning News story that said Dallas County won’t be available to the RNC, even if the GOP wanted to move its convention to Texas. It ain’t likely to make the move here, either. Dallas County is undergoing a surge in infection from the viral plague; so is Texas. We’re out of the game.

These events take many months to plan. For the RNC to seek to change its convention venue at virtually the last minute provides the party with a task that even Donald Trump — the self-proclaimed master of everything and everyone on Earth — cannot complete.

Meanwhile, the Democratic National Committee, which is scheduled to convene its convention in Milwaukee, might turn instead to a “virtual” event that nominates Joe Biden as its nominee. He won’t get the cheering crowd, but merely might rely on telecommunications technology to get the word out to millions of voters as to why he is better suited to lead the nation.

I suspect the bungling, bumbling and blathering from Donald Trump over relocating the RNC might provide Biden with plenty of grist. 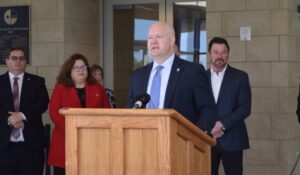 If I were sitting in Collin County Judge Chris Hill’s chair at this moment I might be inclined to tell Dallas County Judge Clay Jenkins to mind his own bee’s wax.

Then again, were I occupying Jenkins’ chair, I might respond with, “Hey, Chris, we’re all in this together. I’m looking out for everyone in the region. That includes the residents of Collin County.” 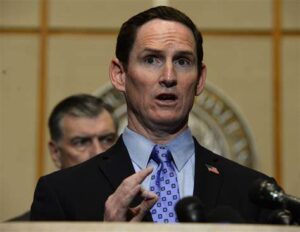 Jenkins took part in a conference call among local county judges and local health officials who were meeting to discuss the coronavirus pandemic; Hill didn’t take part. Jenkins has issued a shelter-in-place order for all Dallas County residents, essentially ordering all non-essential businesses to close; Hill has asked folks to stay at home, too, but has kept businesses open.

Jenkins seems to think that his neighboring county judge hasn’t gone far enough. So that’s why he’s admonishing Collin County residents to stay at home while scientists, doctors, first responders answer the call to battle against the coronavirus.

Hey, I live in Collin County. I am heeding the advice given by Judge Jenkins. As for Judge Hill, well, he ought to rethink his reluctance to order the closure of those businesses.

As the Dallas Morning News has reported: Asked about the call with the hospital executive, Hill said it was accurate that he didn’t participate but that he had participated in two other calls with county judges Thursday that Jenkins didn’t take part in. “We need regional cooperation right now in North Texas,” Hill said. “And I urge Judge Clay Jenkins to reconsider his position.”

I need not remind anyone that the coronavirus cases in North Texas are growing rapidly. Accordingly, as a taxpaying constituent of Chris Hill, I hereby ask him to rethink his position.

We have “regional cooperation” in North Texas, even with Clay Jenkins’ apparent scolding. 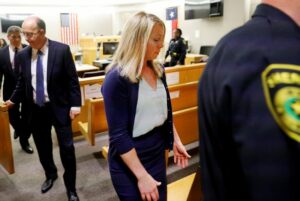 I have been reluctant to comment on a pending case involving a former Dallas police officer who shot a neighbor to death believing he was burglarizing her apartment.

Tragically, Amber Guyger was wrong. She shot Botham Jean to death while he was sitting in his own apartment. A Dallas County jury this week convicted her of murder.

Then today, the jury came back with a prison sentence: 10 years hard time for the ex-officer.

I don’t like second-guessing jurors. They hear all the evidence. The rest of us sit out here in the peanut gallery, drawing our own conclusions based mostly on what we read in the papers or see on TV.

With that, I won’t weigh in on whether the 10-year prison term is enough, or is too much.

Guyger’s life as she knew it has been ruined. She made a tragic mistake a year ago when she thought she was returning to her apartment, only to shoot Botham Jean — a St. Lucia native — to death. She tried to enter his apartment on a separate floor from where she resided. How does that happen? I had asked that question from the beginning.

Well, it did. Jurors had the option of convicting Guyger of manslaughter, but decided to follow the district attorney’s lead and convicted her of murder.

Botham Jean’s family and friends have been delivered the justice they sought. The community can begin the process of healing from this terrible, tragic event.

As for Amber Guyger, well … she will get to reflect on the life-changing error she made that night. Ten years might not seem like enough time to spend behind bars.

Then again, Amber Guyger has shattered her own life, which might prove to be punishment enough. 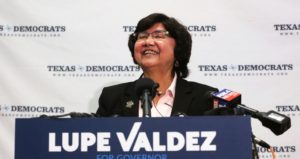 I have to agree. Valdez is the former Dallas County sheriff.  She is Texas’s first openly gay Latina candidate for governor. That’s two strikes against her in the eyes of many Texas voters. The third strike happens to be that she is running against an incumbent who remains popular among a majority of Texas voters.

I’ll be candid. I am likely to vote for Valdez this fall, if only because I have grown weary of single-party domination in Texas. Democrats haven’t won a statewide race in Texas for two decades. I arrived in Texas in 1984, about the time Democrats began losing their vise grip on statewide offices. It was competitive for a time. Then the GOP took complete control … of everything!

The Texas Monthly article, though, does suggest that Valdez — as the leading Democratic Hispanic on the ballot — could serve as a useful stalking horse for many other races on the ballot.

I want to mention, however, one statewide race that also might turn as a result of Valdez’s presence on the ballot. That would be for U.S. senator, which features a competitive contest between Republican Sen. Ted Cruz and Democratic challenger (and U.S. Rep.) Beto O’Rourke.

That is one contest that interests me seriously. I want O’Rourke to launch the Cruz Missile into retirement. It’s not yet clear to me whether O’Rourke’s rural Texas strategy is going to work; he’s spending a lot of time touring rural counties that one might expect to vote Republican this fall. He likely is trying to cut his losses there while maintaining his expected majorities in urban centers.

Valdez’s gubernatorial candidacy might lure enough Latino voters to the polls to give someone such as O’Rourke — who is fluent in Spanish — a serious push toward the finish line.

I don’t yet have a grassroots feel for how the Cruz-O’Rourke contest is playing in North Texas. O’Rourke is likely to do well in Dallas County, which has been trending Democratic in recent years. My sense is that he must do very, very well there to put him over the top.

Lupe Valdez might give him the push he needs.

I get that Valdez clearly doesn’t want to be seen as a mere “stalking horse” for other Democrats on the 2018 ballot. She wants to be the next Texas governor. I’m one Texas resident who would express gratitude if she is able to make the state at least competitive once again between the two major political parties.

That’s not a bad legacy.

A move to another region of Texas gives bloggers such as yours truly a chance to get acquainted with the political movers and shakers of the community.

I’ve been sniffing around the Collin County legislative lineup and have discovered that the 2019 Legislature will be received two rookies from this suburban county.

Texas House District 89 will be represented either by Democrat Ray Ash or Republican Candy Noble. We all know this about Texas politics, which is that it’s highly likely the Republican will win the House race to seat the new state representative.

How do I know that? I don’t know it, although it’s important to note that Collin County voters gave Donald J. Trump 55 percent of their ballots cast in 2016.

The race for the Texas Senate had piqued my interest a bit more. Angela Paxton is the GOP nominee; she’ll face off against Democrat Mark Phariss this fall. Paxton is an interesting candidate, in that she is married to Texas Attorney General Ken Paxton, who is going to stand trial later this year on charges of securities fraud.

But here’s the question that needs to be dealt with head on: Will a Sen. Angela Paxton be able to vote on budget matters that involve salary matters relating to her husband’s income? That seems to smack of conflict of interest. I believe Paxton would need to tread carefully on that matter if she gets elected, presuming of course that her husband gets acquitted of the felony charges that have been leveled against him.

With all this chatter about Texas “turning blue” in this election cycle, I am not yet holding my breath. We have moved from the deeply red, fiery conservative Texas Panhandle to the doorstep of a county — Dallas County — that voted overwhelmingly for Hillary Clinton in 2016. Given my own political bias, I feel a bit more at home politically in this region of Texas.

The learning curve about the politics of these new surroundings remains fairly steep. I’ll need to catch my breath and keep climbing.