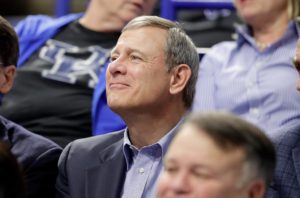 Donald J. Trump is continuing to beat the drum against U.S. Supreme Court Chief Justice John Roberts, who is likely to show needed restraint. I trust he’ll let the president continue his infantile tirade on matters on which he knows next to nothing.

Trump called some U.S. troops stationed overseas and continued his tirade over criticism the chief justice made about the president’s reference to an “Obama judge.” He sought to inform the president that that federal judges are “independent” and not partisan. That, of course, fell on Trump’s deaf ears.

So, then this happened: U.S. Senate Judiciary Committee Chairman Chuck Grassley defended Trump, saying that Roberts didn’t criticize President Obama when the president in 2010 “attacked” Justice Samuel Alito during a State of the Union speech.

Good job, Mr. Chairman, except you got quite wrong.

President Obama didn’t “attack” Alito; he criticized the Supreme Court’s decision on the Citizens United case that opened up campaign finance to corporations, allowing them to spend unlimited amounts of money on political races. He stated his view that the torrent of money would further corrupt the U.S. political system.

Justice Alito famously shook his head while sitting in front of the president and muttered “not true.” Obama, I repeat, did not single any justice out . . . which is quite different from what Trump has done with the chief justice.

To be fair, Obama was wrong to criticize the court in that setting. Most of the justices were sitting in a group in the audience on Capitol Hill. Democrats in the chamber cheered the president; the justices had to take it. I said at the time — and I’ll repeat it here — that President Obama’s criticism was done in the wrong place and in the wrong setting.

There is no equivalence to be found in what Donald Trump is doing now and what Barack Obama did then. As Chief Justice Roberts, I hope he’s done commenting on this ridiculous spat that the president initiated with his ill-informed and ill-tempered remark about an “Obama judge.” 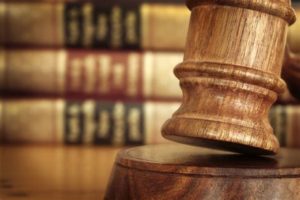 I remain fully committed to the proposition that the nation’s founders got it exactly right when they established a system whereby federal judges get lifetime appointments to serve in a co-equal branch of the U.S. government.

These judges are intended to be independent of political pressure from the presidents who appoint them.

Thus, I am wondering about U.S. Supreme Court Chief Justice John Roberts’ stern rebuke of Donald Trump’s implication that judges are beholden to the men who nominate them to the federal judiciary.

Roberts issued the rarest of rejoinders in reminding Trump that there are “no Obama judges, or Trump judges, or Bush judges or Clinton judges.” They are independent thinkers and adjudicators, he said.

I wonder if the chief justice didn’t actually fire a shot across the front of the rest of the federal judiciary as well, reminding his colleagues of the responsibility they all have to follow the law without regard to the president who nominated them.

I wonder as well if that lesson will be heeded, for example, by the two men Donald Trump has selected for the nation’s highest court: Justices Neil Gorsuch and Brett Kavanaugh.

Both men have pledged to follow the law and to be faithful exclusively to the U.S. Constitution, which they all have taken oaths to preserve and protect.

Donald Trump appears for all the world to be making the judicial system loyal to him, irrespective of what the law dictates. That is what I believe Chief Justice Roberts was seeking to address with his statement today.

And of course, the president isn’t taking the criticism quietly and respectfully. He is firing back at the chief justice. Trump said in a tweet: “Sorry Chief Justice John Roberts, but you do indeed have ‘Obama judges,’ and they have a much different point of view than the people who are charged with the safety of our country.”

Yes, judges have differing points of view. To say that they are beholden to partisan politicians steeps to cynical depths we haven’t seen before.

It is demagoguery, pure and simple.

My quick answer: no, they shouldn’t.

Roberts said this today: “We do not have Obama judges or Trump judges, Bush judges or Clinton judges. What we have is an extraordinary group of dedicated judges doing their level best to do equal right to those appearing before them. That independent judiciary is something we should all be thankful for.”

We can argue all day about whether the federal judiciary is actually independent. Justice Brett Kavanaugh’s Senate confirmation hearing showed just how political the high bench has become, many would argue. I won’t join that debate today.

The issue is whether the president should be condemning them or whether judges should be let loose to respond.

Donald Trump has been castigating judges, calling them “Obama judges” or “so-called judges” or judges who oppose his policies because they are appointed to the bench by someone from another political party.

The chief justice is responding cleanly and succinctly to the president.

It’s the rare quality that gives the statement its gravitas, adds weight to it. It lends and air of added ummmph to the chief’s rebuke of the president.

Thus, my hope would be that federal judges — let alone the chief justice of the nation’s highest court — would remain quiet. If they all start offering opinions about careless statements coming from politicians, the frequency would clearly water it all down.

I welcome the chief’s remarks. That they are so rare makes them even more significant. 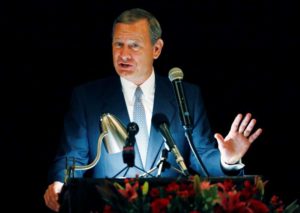 Listen up, Mr. President. Sit up straight and pay attention. The chief justice of the United States of America is speaking words of wisdom.

Chief Justice John Roberts has informed you, Donald Trump, that the country doesn’t have “Obama judges, or Bush judges or Clinton judges.” The federal judiciary, he reminded all of us in a statement issued today, is an independent branch of the government. The men and women who adjudicate cases must be free of partisan consideration, such as the individual who nominated them to whatever bench where they sit.

It’s a rare event to have the chief justice admonish a politician, Mr. President. Congratulations, you’ve stirred the pot!

The chief is admonishing you for those intemperate remarks you keep making about judges. You had the gall to refer to a U.S.-born federal jurist as a “Mexican” only because he is of Mexican heritage; the judge was ruling against your anti-immigration efforts. You referred to another judge based in Hawaii as a “so-called judge” because he knocked down your Muslim travel ban. Another judge who ruled against your recent asylum ban became an “Obama judge.”

Thus, the chief justice got riled enough to speak out against your careless references to the men and women who sit on our federal bench.

Perhaps he’s ticked that you criticized him directly for his vote in 2012 to preserve the Affordable Care Act. That makes it even worse, Mr. President.

You, Mr. President, keep demonstrating an absolute and unwavering ignorance of the roles that the co-equal branches of government play. You don’t understand the limits of your own executive power, or the limitations placed on the legislative and judicial branches of government. Your habitual loud mouth and careless rhetoric underscore your own ignorance of the governmental framework you took an oath to “preserve, protect and defend.”

I am glad to know that Chief Justice Roberts has called you out, although his language — quite understandably — was measured and scholarly.

I know you won’t learn from this. I just had to weigh in anyway.

Mr. President, you simply scare the spit out of me.