I just want to share this blog post about President Obama’s stirring eulogy this past week of the late state Sen. Clementa Pinckney, one of the nine people killed in that horrifying massacre in Charleston, S.C.

I don’t know what to add to this.

So I won’t even try.

I follow a blog that has produced a most interesting essay.

It comes from Adele Stan, writing in the American Prospect.

The essay says, in summary, that removal of the Confederate flag and other symbols of a dark time in our nation’s history, is worthwhile and necessary. But it’s the easy part. The hard part is tackling the issue it represents: insidious racism.

The essay concludes with this: “So, yes, remove the Confederate flag — that standard of dehumanization, treason, and murder — from our sight. But proof of our intention demands great change in the way in which we lead, the way in which we live, the way in which we think; we must be willing to truly open the riches of progressive society and culture to all. To do that, we must — each and every one of us — examine our own prejudice, and be determined to transcend it. Then the real work of a just society can begin.”

It’s good that we’re having this discussion in the wake of the Charleston tragedy. I’m glad to see public opinion overwhelming the minority that still seeks to find legitimacy in symbols of hate and bigotry.

But as it is noted in the essay attached here, we need to look within to rid ourselves of “our own prejudice.”

Gov. Nikki Haley, a South Carolina Republican, has joined the call she should have led immediately after a suspect was caught and charged with murdering nine African-American church members in Charleston.

She’s urged the South Carolina legislature to take down the Confederate flag that flies at full staff on the statehouse grounds in Columbia.

She waited five days after the tragedy. The suspect, a young man named Dylann Roof, is an avowed racist. He wrote in his diaries he intended to start a “race war” by killing African-Americans.

Haley’s call came amid a bipartisan show of solidarity today. Republican presidential candidates, GOP lawmakers, Democratic lawmakers, the head of the Republican National Committee … they all were there to join Gov. Haley’s call.

Look, it’s not just about a flag. It’s about what that flag has come to represent.

To many millions of Americans it represents hatred and evil, racism and murder. It represents the hideous views of hate groups, such as the Ku Klux Klan, that wave the flag with pride at their hate-filled rallies.

And what about that “Southern heritage” crap we hear from those who still resist the notion that the flag symbolizes tyranny against Americans? Their pleadings are sounding more hollow every passing hour.

South Carolina law says the legislature has the sole power to remove the flag. Thankfully, lawmakers are coming back into session to look at several issues.

Let me think. Do you suppose the flag will be one of them?

Take down the flag.

Nothing good has come from the Charleston, S.C., massacre.

However, I am glad that we’re having this discussion of the Confederate flag and its place in U.S. history and in contemporary times.

Those who see the flag now are more willing to call attention to the hate that it symbolizes in the hearts and minds of millions of Americans.

Dylann Roof apparently thought enough of the flag to wave it — apparently with some pride — prior the event that took the lives of those nine church members in Charleston. Roof has been accused of nine counts of murder.

But back to the flag.

None of reasons I’ve read that seek to justify reasons for flying the Confederate flag works, in my view. It all goes back to what the flag represents today and how it now stands as a symbol of hate, oppression, enslavement, and indeed treason.

Those calls we’ve heard since, oh, about January 2009 about secession? They sound a good bit more offensive today, given the tragedy in Charleston and the debate that’s ensued about whether the Confederate flag should fly at all — let alone on public property, as it does in front of the South Carolina statehouse. 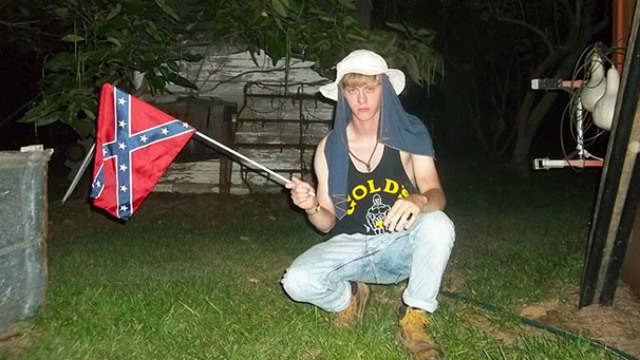 Can there be any clearer understanding of why so many Americans despise the Confederate flag and what it symbolizes to them?

Dylann Roof is accused of killing nine black members of a Charleston, S.C., church. He shot them to death while studying Scripture with them in the church. The picture here shows the young holding the flag symbolizing the hatred he reportedly holds in what passes for his heart.

I suppose so, if you believe that the Confederate States of America was right to secede from the U.S.A., and then launch the Civil War, the bloodiest conflict in American history. And why did the CSA do that? Because it believed in that euphemistic “states rights” issue … which included allowing states to sanction the enslavement of human beings.

Dylann Roof’s fate has yet to be determined.

His past, as illustrated by this photograph discovered by his racist manifesto, includes this symbol of hate.

Mitt Romney has added his important voice to the cries of those who want South Carolina to take the Confederate flag down from its statehouse grounds.

Not all the leading politicians in this country have taken up the cause. This should be a no-brainer.

The 2012 Republican presidential nominee said once again that the flag symbolizes hate. Indeed, that symbol has overshadowed the “Southern pride” heritage that many still proclaim.

As Romney spoke out in the wake of that terrible Charleston, S.C., church massacre, other pols continue to hold their tongue.

U.S. Sen. Ted Cruz, the Texas Republican and presidential candidate, said the decision must rest ultimately with South Carolinians. Sure thing, senator, but South Carolina doesn’t operate in a vacuum. It is one of 50 united states, yes? Thus, it is totally fair for all Americans to express outrage that the state hasn’t taken down a flag that symbolizes — in the eyes of millions of us — the kind of hatred that produced the carnage in the Charleston Bible study classroom.

Another GOP presidential candidate, South Carolina U.S. Sen. Lindsey Graham, calls the flag “part of who we are” as Southerners. Oh, please. Hasn’t he seen that flag waving at Klan rallies where participants say those things about their fellow Americans who happen to be of different races?

I’m with Gov. Romney on this one.

Take down the rebel flag.

I can’t believe I just read this.

The flags flying atop the South Carolina state capitol building — the Stars and Stripes and the state flag — were lowered to half-staff to honor the memories of the nine victims shot to death in the Charleston church.

But the Confederate flag that flies on the grounds in front of the capitol building is flying high.

Why is that? Apparently state law requires the legislature to sign off on how the rebel flag is displayed.

Gov. Nikki Haley has authority over the flags flying over the capitol dome. She doesn’t have exclusive say over the Confederate flag.

You know the story. A young white man — an apparent white supremacist — killed nine black congregants while studying the Bible with them.

The Confederate flag represents to many of us the very racism that likely drove the shooter to do what he did.

The flag doesn’t deserve to fly on public property.

That it remains at the top of the staff that holds it is insulting in the extreme.

Rick Perry had an “accident” in an interview dealing with the Charleston, S.C., massacre.

He called the attack that killed nine church members an “accident.”

The former Texas governor’s handlers sought to take it back, saying he meant to call it an “incident.”

But the damage may have been done. Social media took off like a rocket with the “accident” comment, comparing it to Perry’s infamous “oops” gaffe uttered during a debate in the 2012 GOP primary season.

The carnage created allegedly Dylann Roof was no “accident,” clearly. Heck, I wouldn’t settle for the word “incident” to describe it. It’s much, much worse.

But as social media thought to make hay about the former governor’s gaffe, I’m struck by the lack of response from Rick Perry himself.

I’m not interested in hearing what his press flack says about what Gov. Perry intended to say.

As expected, Perry sought to frame his response in part against how he characterized President Obama’s reaction to it, contending that the president hates guns so much that he would prefer to disarm Americans. Oh, never mind that the president has declared his support of the Second Amendment.

Governor? What did you intend to say? And please, don’t just parrot what your press person has said what you meant.

Just as the U.S. Supreme Court ruled that Texas is able legally to deny issuing motor vehicle license plates depicting the Confederate flag, the issue of flying the flag in South Carolina has emerged to become a central discussion topic.

The Confederate flag flies in front of the state capitol in Columbia, S.C. But over on the Atlantic Coast, in Charleston, a young man this week opened fire in a predominantly black church, killing nine worshipers in a horrifying massacre.

Dylann Roof admitted to committing the crime today in court, so we can take away the “alleged” description of the person who did the terrible deed.

Why? The young man is a raving racist, according to those who know him.

Thus, we get back to the issue of the rebel flag. What does it represent? To many Americans, it symbolizes hatred. It flies at Ku Klux Klan rallies, where Americans proclaim their “pride” in a movement that enslaved other Americans.

The flag should come down. It shouldn’t fly on the South Carolina’s capitol grounds. It should be put away, never to be seen in public.

South Carolina Gov. Nikki Haley has it within her power to remove the flag. She should act.

Think about this, too: Charleston was where the Confederate States of America fired the first shots that ignited the Civil War. They bombarded Fort Sumter in Charleston harbor and thus began the bloodiest war in American history. Why? Because the Confederate states had seceded from the Union because they claimed that as individual states, they had the power to own slaves.

The flag symbolizes hatred, the kind of hatred that prompted Dylann Roof to attack people — in a place of worship.

Bring it down, Gov. Haley.

There’s no real need to say much more than what’s in this blog about the Charleston, S.C., carnage.

Jim Mitchell writes for the Dallas Morning News and he devoted the following post to answering someone who accused him of “race-baiting.”

Mitchell is on-point in telling the letter writer that he/she is trying to deflect responsibility of what happened in Charleston by saying it was allegedly committed by a “deranged white man.”

Nine people are dead. They are victims of a mass murderer. He concludes: “Let’s stop playing games of racial original sins, and recognize that racial tensions are denying this country of the opportunity to reach new heights for all Americans. That’s not race-baiting. That’s asking for justice and fairness, nothing more and nothing less.”

Now, let us continue to pray for our country and for the souls of those who were lost.