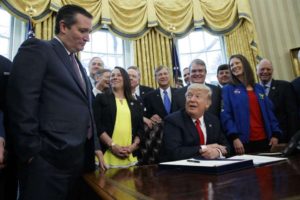 Human beings were put on this Earth to explore.

We’ve sought new worlds on our own planet. We’ve committed to seeking new worlds “out there,” beyond our worldly confines.

To that end, Donald J. Trump has signed into law a bill that commits $19.5 billion to NASA with the aim of launching human beings into deep space, possibly for exploration of Mars.

Oh, how I want to live long enough to see that day.

The president signed the bill into law in a ceremony at the White House surrounded by astronauts and politicians. It was a jovial affair that — I’m sorry to say — got overshadowed this week by the rancorous and raucous debate over overhauling the nation’s health care insurance system.

The NASA appropriation is worth the money, the effort, the emotional capital and the anxiousness that goes along with what many of hope will transpire: a mission to Mars.

“For almost six decades, NASA’s work has inspired millions and millions of Americans to imagine distant worlds and a better future right here on Earth,” Trump said during the signing ceremony. “I’m delighted to sign this bill. It’s been a long time since a bill like this has been signed, reaffirming our commitment to the core mission of NASA: human space exploration, space science and technology.”

As the Albany (N.Y.) Times-Union reported, “The measure amends current law to add human exploration of the red planet as a goal for the agency. It supports use of the International Space Station through at least 2024, along with private sector companies partnering with NASA to deliver cargo and experiments, among other steps.”

I was among the Americans disappointed when NASA grounded its shuttle fleet. We now are sending Americans into space aboard Russian rockets. I’m trying to imagine how Presidents Kennedy and Johnson would feel about that idea, given their own commitment to the space program and the defeating the then-Soviet Union in the race to the moon … which we won!

Space exploration isn’t a “frill.” It ought to be part of our political DNA. It’s already ingrained in human beings’ desire to reach beyond our grasp.

I spent many mornings with my late mother waiting for Mercury and Gemini space flights to launch. Then came the Apollo program. Our nerves were shot as we waited for astronauts to return home walking on the moon.

I grieved with the rest of the country when that launch pad fire killed those three astronauts on Apollo 1, when the shuttle Challenger exploded 73 seconds after liftoff and when the shuttle Columbia disintegrated as it flew over Texas on its way to landing in Florida.

I’ll be a real old man — I hope — when they send humans to Mars.

This new NASA appropriation could take us a bit farther along on that journey.