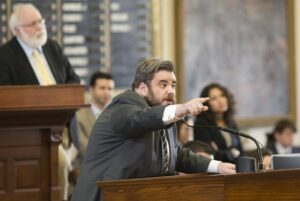 A right-wing blowhard is calling it a legislative career in Texas at the end of his current term. Good for state Rep. Jonathan Stickland of Bedford. Hit the road, dude and don’t let the door hit in the wherever on your way out.

I wish more of them righties would call it quits. I also have my fair share of peeves at the other end of the spectrum.

The point of this post is seek to find statesmen and women who speak to us in measured tones. Who don’t feel the need to rush toward a TV camera and a microphone whenever they present themselves. Who know what the hell they’re talking about before words start flying out of their pie hole.

They used to joke in Washington that the “most dangerous place was between so-and-so and a TV camera.” That punchline used to include, say, Republican U.S. Sen. Phil Gramm of Texas. He turned over that particular honor partially to one of his successors in the Senate, fellow GOP Sen. Ted Cruz, also of Texas.

Then we had former U.S. Rep. Anthony “Carlos Danger” Weiner, the New York Democrat who destroyed his public career by getting involved with “sexting” with underage girls. In his day, he could bloviate with the best of ’em.

Avenatti could be seen on every cable TV news show under the sun. Until he got indicted for mail fraud! Now he has more or less, um, vanished.

Then, of course, we have Donald Trump. Enough said about that guy.

Social media have played a huge role in this phenomenon. These politicians/celebrities/publicity hounds use social media to promote themselves and jump at any chance to be seen and heard.

I am just one American who has tired of the blowhards who cannot keep their traps shut. Yes, my bias compels me to refer mostly to the right-wing goofballs. However, I have taken some of the lefties to task for being way too, um, available to the media that clamor for a sound bite from them.

I am an old-fashioned guy in this respect: I want my elected representatives to be seasoned, mature, comfortable in their own skin and rational when they seek to be heard.

The blowhards can simply keep their mouths shut.