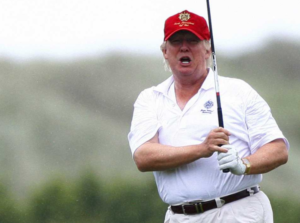 I have followed a longstanding policy to avoid making fun of people’s names or their appearance.

Then along came Donald John Trump, who ran for president of the United States and, yes, along the way made an annoying habit of needling his political foes over their appearance.

Sen. Rand Paul of Kentucky? Some of the women who accused him of sexual impropriety? Carly Fiorina?

Trump said some hideous things about them.

So, the president is now fair game to those of us who, um, feel compelled to comment on some aspects of his physical appearance.

The White House physician, Ronny Jackson, says the president weighs in at 239 pounds; he stands 6 foot 3 inches tall and he is close to being declared “obese,” according to Dr. Jackson.

Some folks are questioning whether Trump really and truly weighs a mere 239 pounds, suggesting that he is, um, a good bit heftier.

Trump may be the smartest, richest, least racist person any of us have ever seen.

But … he is far from the fittest. He loves his cheeseburgers, Diet Cokes and doesn’t exercise a lick — or so we’re led to believe. 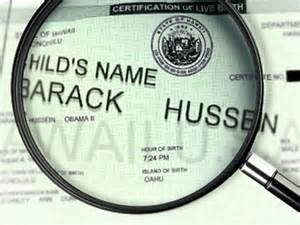 Does anyone else see the irony of Donald J. Trump’s bitching about “fake news”?

This is the guy who for about a half-dozen years kept alive the bogus “news” about Barack Obama’s place of birth. He questioned whether the former president was qualified to serve in the office he held for eight years.

He kept harping on the rumor that Obama was born in Kenya, the birthplace of his father. He fomented the Mother of All Fake News Stories.

Now the president — the one-time bard of the birther movement —  calls anything he considers negative to be “fake news”? 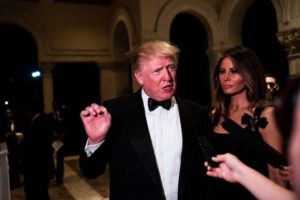 He just cannot keep his trap shut. He now says he has information about the infamous election hacking that “others don’t know.”

I cannot stop thinking about the president-elect’s assertion a number of years ago that he had information about President Barack Obama’s place of birth that others didn’t know.

The birther in chief led the rumor monger parade in asserting that Barack Obama’s presidency was illegitimate. He said he had dispatched teams of spooks to Hawaii to learn the “truth” about the president’s place of birth; it wasn’t in Hawaii, the then-reality TV celebrity said.

It turned out that Trump had nothing. Zero. He was full of bull corn.

Now he has information about whether Russians hacked into our election system? That he knows things others don’t know? That our professional spies and intelligence officials don’t have the goods on the Russians?

Trump keeps expressing skepticism about the CIA analysis, citing bogus intelligence reports about weapons of mass destruction prior to the start of the Iraq War in 2003. Hmm. Has anyone suggested to Trump that the WMD “analysis” might have been forwarded by the neocons who comprised President Bush’s inner circle of advisers, that it didn’t come necessarily from the CIA or the Defense Intelligence Agency?

Stop teasing us, Mr. President-elect, with nutty notions that you’re smarter than the intelligence officers who are charged with keeping us safe from our adversaries. 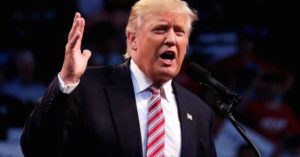 Donald J. Trump’s half-assed declaration that the birther movement he helped perpetuate is now over has glossed over the single most under-reported element of this entire controversy.

It doesn’t matter one damn bit whether baby Barack Hussein Obama Jr. came into this world in Hawaii, Kenya or on Mars. He would have been constitutionally qualified to hold the office of president of the United States.

Trump, the Republican presidential nominee, declared Obama was “born in the United States. Period.” That ends the lie he’s been telling for more than five years, that Obama was a foreign-born pretender to the presidency.

It’s always been a racist smear meant to defame the twice-elected first African-American president. Trump knows it. Yet he kept saying it, more than 60 times out loud over the years, according to some sources.

Do you remember when Trump raised the same issue about former Republican primary rival Ted Cruz, who actually was born in Canada to an American mother and a Cuban father? Cruz, the Texas U.S. senator, said he earned his U.S. citizenship by virtue of his mother’s citizenship.

This utter crap about President Obama’s place of birth continues to fester only because of the man’s racial makeup.

For Trump to have perpetuated the lie is a disgrace on its face. His tepid declaration late this past week that, by golly, he was wrong all those years is nearly as disgraceful.

Will it go away now that the GOP nominee has said it’s over? No. Nor should it. This individual, Trump, should do what he says he never does: apologize to the president of the United States for seeking to defame him. 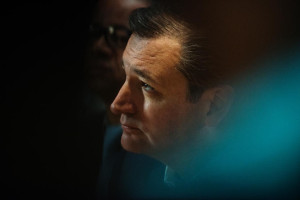 The Ted Cruz Birther Movement is slow to die. Heck, it might never wither away!

Constitutional crybabies keep insisting that because the Republican U.S. senator from Texas — and GOP candidate for president — was born in Canada that he isn’t eligible to seek the presidency, let alone hold the office if elected.

Plaintiffs in several states have sought to block Cruz’s candidacy on specious grounds that the senator is a foreigner.

These challenges are doomed. They won’t get to first base, I believe, with the U.S. Supreme Court.

Young Rafael Edward Cruz came into this world as a U.S. citizens because his mother is an American. Therefore, no matter where on Earth baby Ted was born he became eligible to run for the presidency.

The U.S. Constitution doesn’t define “natural-born citizen.” It doesn’t specify that a president must have been born on sovereign U.S. territory. All it specifies is citizenship — and federal law, by golly, is pretty damn clear on that point.

Still, this birtherism regarding Cruz’s eligibility is nearly as funny as the cockamamie notion that dogged President Barack Obama right up until the moment he won re-election to a second — and final — term in November 2012. 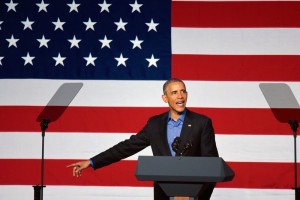 Count me as one American who was impressed with former Republican presidential nominee Mitt Romney’s brutal critique of Donald J. Trump’s rise to political power.

I listened the other morning to every word of Mitt’s 17-minute speech in Utah. (Yes, I’ll call him Mitt because I like the sound of the name.)

Mitt sought to stand for the GOP “establishment” in its effort to stop Trump’s nomination as the party’s next nominee for presidential of the United States.

It didn’t go over universally well, though.

Some folks wondered whether Mitt was the right guy to carry the message forward. After all, he lost fairly handily to President Obama in 2012 and, by the way, he did so even with the coveted endorsement of one Donald J. Trump.

One of the doubters happens to be the president his own self.

Obama said the GOP is just “shocked that there’s gambling” going on here.

Speaking at a Texas Democratic fundraiser, Obama took particular pleasure in reminding donors that the GOP establishment stood by silently while Trump and others promoted the wacky notion that the president was born in a faraway land, that he was an illegitimate candidate for president.

“As long as it was directed at me, they were fine with it. It was a hoot,” Obama told the Austin crowd.

I understand where the president is coming from on this matter. Indeed, it continues to boggle my admittedly feeble mind that Obama’s place of birth was even an issue in the first place, given that his mother was an American citizen, which by my reading of the U.S. Constitution granted U.S. citizenship to Baby Barack the moment he took his first breath.

But the GOP brass didn’t care to silence the idiocy being spewed by Donald Trump and others.

So now they’re shocked and dismayed at what they’ve helped create?

I still stand behind Mitt’s criticism of Trump. If only, though, he would acknowledge the mistake he made in seeking Trump’s endorsement. 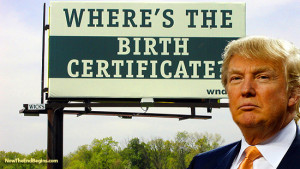 Here we go … one more time.

Second, the target was Ted Cruz, junior senator from Texas, who actually was born in Canada to an American mother and a Cuban father.

Now it’s Marco Rubio, the junior senator from Florida, who was born in the Sunshine State, but whose parents immigrated there from Cuba.

All three men allegedly are constitutionally ineligible to run or serve as president.

The man making the assertion? Donald J. Trump, the frontrunner for the GOP presidential nomination.

Trump now says Rubio might not be eligible. His parents’ aren’t American, Trump said. Oh, wait. Rubio was born on U.S. soil. U.S. law says he’s a citizen automatically. Doesn’t matter, Trump asserts. He questions the eligibility, just as he has done with Cruz, even though U.S. law granted young Ted citizenship because Mama Cruz is an American citizen.

And the president? Well, he was born in Hawaii. Trump hasn’t stopped questioning his eligibility, either, even though the president’s late mother also was a U.S. citizen.

Trump is relying on others’ assertions. He’s using social media to send out the doubts that he denies planting. Sure thing. He’s adding plenty of irrigation to the doubts, though, by continuing to provoke needless discussion and unfounded questions about one of his opponents.

Will this latest specious assertion do any damage to Trump? I’ve noted before that I am done predicting such things. This campaign has entered a parallel universe where the normal rules of decency and decorum no longer apply.