The link I am attaching to this very brief post is an interview with President Barack Obama and Navy Admiral William McRaven.

They are looking back 10 years since the raid that killed Osama bin Laden. It is heartfelt. It tells us how the two men felt as they were about to make decisions that could have gone badly but instead ended with the death of the 9/11 mastermind.

It’s about 14 minutes long. It is worth your time to watch. 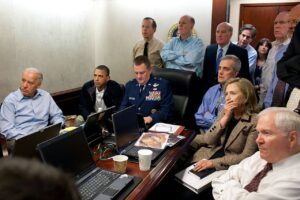 Americans are going to be marking a date over the weekend that should fill them with justifiable pride in the capabilities of our military special forces.

It was on May 1, 2011 that Navy SEALs and CIA commandos raided a compound in Pakistan and killed Osama bin Laden, the leader of al-Qaeda and the mastermind of the 9/11 terror attack that had occurred a decade earlier.

Ten years have passed since that raid.

I want to talk briefly here about something that flew out of Donald Trump’s mouth not long after Army Special Forces killed the Islamic State leader on Trump’s watch.

The then-president suggested out loud that the bin Laden raid should have occurred far earlier than it did. Trump was crowing about the success his team had in finding Abu Bakr al-Baghdadi and dispatching him. Why couldn’t the Special Forces Command do the same with bin Laden, Trump said.

The military commander of that mission was Admiral William McRaven, himself a SEAL and head of the Special Ops Command. It took McRaven’s team time to assemble and analyze all the intelligence it had collected on bin Laden’s location. Indeed, as President Obama said at the time, he wasn’t absolutely sure that bin Laden would be in the compound once the SEALs and the CIA spooks arrived. It was a gamble … but it paid off!

Thus, for Trump to denigrate the great work that anti-terrorism experts from the Bush and Obama administrations did to locate and to ascertain with some degree of certainty that their findings were correct simply went beyond the pale.

I am going to celebrate the victory our forces scored when they eliminated Osama bin Laden. No amount of cheap second-guessing ever would denigrate the courage of the commander in chief to issue the order and the extraordinary skill of the men who executed it. 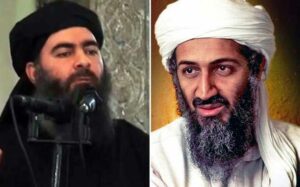 Donald Trump is now engaging in a “Can you top this?” game involving the dispatching of international terrorists.

The president had the gall to say that the killing of Abu Bakr al-Baghdadi was “bigger” than the 2011 killing of Osama bin Laden. While he was taking questions from reporters Sunday after announcing al-Baghdadi’s death at the hands of Army Delta Force commandos, Trump decided — and this is no surprise — to suggest he had one-upped the mission authorized by President Barack H. Obama to kill bin Laden.

Oh, he did say that killing the al-Qaeda leader, bin Laden, was “big,” but then he said taking out the Islamic State honcho was an even more significant event.

Well, I won’t enter a debate over which death was bigger. It is pointless and irrelevant.

I just want to re-state what I said earlier, which is that al-Baghdadi’s death was a gigantic blow to ISIS. Moreover, I applaud the president’s decision to authorize the mission.

It was huge. Then again, so was the Navy SEAL mission to kill bin Laden, who masterminded the 9/11 attacks on New York and Washington that killed 3,000 innocent victims in both cities.

Why in the world does the president of the United States choose to cheapen a monumental military victory with an idiotic boast that this take-down was bigger than an earlier one?