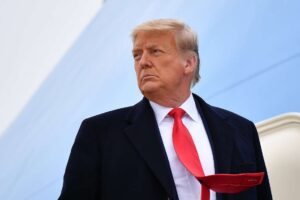 Republicans are proud to proclaim their party as a “big tent” organization that welcomes all ideas, all points of view.

Why, then, are state GOP leaders rebuking some of the seven Republican U.S. senators who voted to convict Donald Trump of inciting an insurrection during the Senate trial that acquitted him of the allegations?

Sens. Richard Burr, Lisa Murkowski, Pat Toomey, Bill Cassidy and Ben Sasse have been censured by their states’ Republican Party. Sens. Mitt Romney and Susan Collins so far have avoided such a rebuke. So far!

Sen. John Thune has come to the defense of his GOP colleagues, chastising the state parties for their actions against the senators. He notes that the party prides itself on welcoming diverse opinions.

According to Newsweek: “There was a strong case made. People could come to different conclusions. If we’re going to criticize the media and the left for cancel culture, we can’t be doing that ourselves,” Thune, the No. 2 Senate Republican, told the Associated Press.

Republicans Hit Back at GOP Censures of Senators Who Voted to Convict Trump (msn.com)

There you go. Is the GOP a “big tent party” or not? If it is, then the tent appears to be collapsing over them.

This matter reminds me of the kind of thing you hear on university campuses when conservative thinkers are asked to give speeches to student bodies. How many times over the years have you heard about faculty senates and student council leaders demanding that their schools rescind the invitation because they don’t want to hear what the guest has to say.

I am compelled to ask when that rejection occurs: Aren’t colleges and universities supposed to welcome diversity of thought?

This intraparty squabble only exemplifies what many of us have thought for some time, that the GOP’s big tent is open only to those who adhere to a certain kind of thought, or are loyal only to certain individuals.