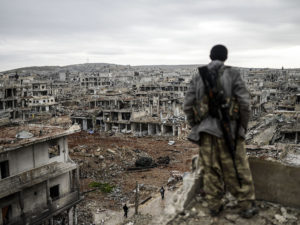 That is a horrific act, to be sure, and the president was right to take action against Syrian dictator Bashar al Assad.

Here, though, is the question: What about the barrel bombs that Syrian military forces are dropping on civilian victims?

It is agreed around the world that chemical weapons use must be stopped. The images we see of children writhing in agony are heartbreaking in the extreme.

However, the Syrian government has killed many thousands more innocent victims using barrel bombs, which are devices filled with shrapnel. The bombs explode and the shrapnel flies out, shredding whatever — and whoever — is in its path.

Death by barrel bomb might not be as agonizing — and horrifying to watch — as death by chemical weapon, but Assad’s use of the hideous ordnance needs a stern world response as well.

What is the strategy to deal with this hideous monster? Finally, what are we going to do about the Russian role — the Russians’ complicity — in the use of barrel bombs and chemical weapons?