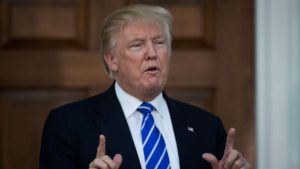 “Failure is not an option.”

Hold that thought, expressed by the actor Ed Harris portraying NASA flight director Gene Krantz in one of my all-time favorite films, “Apollo 13.”

Donald J. Trump is about to become president of the United States. I have made it one of my missions to call attention to the many — the seemingly countless — shortcomings of this man’s ability to do the job he is about to assume.

I make no apologies for using this venue to criticize the president-elect with as much harshness as I can muster.

Do I want him to fail? Do I want the country to suffer because of some wrongheaded decisions I believe he is entirely capable of making?

No. Not in the least. I do not wish this individual to fail.

Just as the actor Ed Harris noted, failure is “not an option” for a nation that relies on its president to propose policy directives that govern all 300 million-plus of us out here, even those of us who didn’t vote for him.

Daddy Dittohead, aka the right-wing radio gas bag Rush Limbaugh, once (in)famously declared over the air that he “wants” President Obama to fail. He wished for failure, he yearned for the president’s economic stimulus package — which he and Congress enacted to help bail out collapsing industries — to take us down the road to ruin.

What the hell kind of alleged patriot wants his fellow Americans to suffer because a president’s policy fail?

I retain little faith that Donald J. Trump will succeed. Hell, I’m not even sure what the guy stands for!

If he does succeed, I will join millions of other Americans in the round of applause.

I do not, though, wish for failure. It ain’t an option, man.