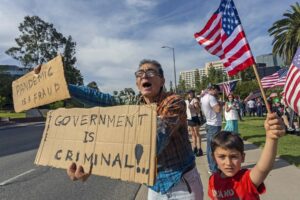 I hate feeling angry. I also hate that the people who represent me in the government we elect are angry with each other and seemingly with the world.

Who’s to blame for this anger? As my dear Mom would say: I’ll give you three clues … and the first two don’t count.

I have to circle back to the guy who lost the most recent presidential election, but whose own anger at losing it fairly, squarely and legally has prevented him from saying so. Thus, the anger has festered.

I won’t spend a lot of time and emotional capital lamenting the cause of this anger. I’ve traipsed down that road often and with extreme prejudice already.

What is so concerning to me is the fear that the anger will persist long after Donald Trump is no longer on the scene. Now, by “on the scene,” I am referring to his relevance as a political player. However, he is 76 years of age and eventually he’ll be seriously “no longer on the scene” … if you get my drift and I’m sure you do.

Even after he departs the good Earth, I fear his legacy will fester amid the anger he sowed the moment he rode down the escalator at that glitzy hotel of his and declared his intention to run for the presidency. His first words were to blame Mexico for sending us drug dealers, rapists and killers and then he vowed to ban all Muslims from coming to the Land of Opportunity.

The anger has continued to grow in Congress, and it has spilled onto the floors of state legislatures, into city halls and county courthouses, into school board meeting rooms. Qualified educators are quitting the teaching profession they formerly loved because parents have grown angry over mask mandates to fend off the infectious pandemic that has killed about 1 million Americans.

Members of Congress say they cannot serve with members of “the other party” because of physical threats. Have I mentioned that most of the complaints come from congressional Democrats who point the finger at hyper-angry Republicans? There. I just did.

I am by nature a happy fellow. I do not like being angry. It’s not part of my DNA. Indeed, I hope that when my time on Earth runs out that I’ll be remembered as a nice guy whose first instinct was to think well of people.

I do have a fear that the anger that permeates so much of our life these days is becoming like an indelible stain that I cannot wash away.

Therein just might lie Donald Trump’s enduring legacy. He has built an angry society. It is so very unbecoming.

Anger is an emotion that fills me with — yep, that’s right — anger, lots of anger.

I get angry with myself for feeling as angry as I do at times, particularly over matters or individuals I cannot control. The current political climate swirling around us provides me with the latest example of how angry I have become.

I am angry at the politicians and their sycophants who continue to keep The Big Lie alive and kicking. The Big Lie, as you know, purports to suggest that Donald Trump actually won the 2020 presidential election. He didn’t. He lost it bigly.

He came to Texas this past weekend and proclaimed, among many falsehoods, that the “election system is corrupt.” Dammit to hell, anyway! It isn’t! When he says such a thing, he defames the good men and women associated with both major political parties who take an oath to do their jobs with integrity and honesty and then follow that oath to the letter.

That makes me angry as hell. However, I also get angry with myself because the only weapon I have is this blog in which I can express my anger. I want to make a difference. I want this anger to sink into the thick skulls of the individuals who ignite these hard feelings. It doesn’t. I feel as though I am talking to the chair on which I am sitting at this moment.

My anger is visceral these days in a way I have never experienced. I find myself using harsh language when referencing the ex-POTUS. So help me, I never have used this kind of language when referring to POTUSes who never got my vote.

I want the anger to pass. I fear that the only way that’ll happen will be for the man who lights the fuse to disappear. I just will have to deal with my anger and seek to avoid getting so damn angry at myself.