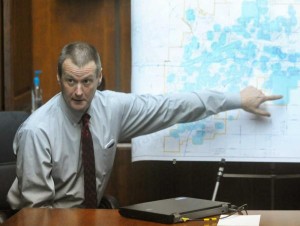 The Amarillo City Council decides on a single personnel choice. The council gets to choose the one person who runs the city’s massive machinery.

That person, the city manager, then makes all the other key hires: police chief, fire chief, city attorney, assistant city manager … all of ’em.

Well, now the City Council gets to make the one selection the city charter empowers it to make.

Jarrett Atkinson has resigned as city manager. For the life of me, I don’t know why he’s drawn the criticism he has received from at least two of the new members of the City Council. But he has and the council is in position to make that criticism.

The council now gets to scour the landscape for a worthy successor and I believe quite strongly that we are likely to witness a serious demonstration of the divisions that exist on the five-member governing council. The municipal chasm is likely to dissuade senior administrator from within City Hall to seek the top job. Thus, the city might look high and low, hither and yon for the next city manager.

The three newest members of the council appear wedded to some skepticism about plans for advancing the future of the city’s downtown district. They managed to engineer a citywide non-binding referendum that will decide the future of the multipurpose event venue; the vote will occur on Nov. 3.

They dislike the MPEV as presented.

The other two council members favor the project.

Back to the issue at hand: What kind of city manager is the council going to hire? Will the new city chief executive officer need to pass a litmus test that requires him or her to adhere step by step with what the bosses on the council want?

The city has been blessed with relatively few city managers over the course of the past 52 years. John Stiff served in that post for two decades before retiring in 1983. John Ward succeeded him and he served another 20 years before moving to the private sector in 2003. Alan Taylor was a relative short-timer in the post before he retired. Now it’s Atkinson who’s leaving, again after a short period of time.

In the aggregate, though, steady administrative leadership has blessed Amarillo for more than a half-century.

That stability now appears to have been torn apart by the fractiousness we’re hearing among City Council members — and by a reckless call for Atkinson’s resignation by a new council member, Mark Nair, immediately after he took office.

Pay attention, gentlemen: You need to think carefully about who you hire to run the city.

We’ve made a lot of progress in Amarillo over the course of many years. We are moving forward today. The next municipal CEO needs to be mindful of where we’ve been, where we are and where we’re going.

The referendum will decide the future of the MPEV before the city finds a new manager. Still, my own preference would be a city manager willing to think big about how to revive the city’s downtown district.

I’ve known Walter Riggs for a number of years. We served in the same service club together. He’s a banker and a smart fellow devoted to Amarillo.

He’s been on a tear lately, bemoaning the negativity surrounding the campaign relating to downtown redevelopment efforts in Amarillo. He posted this item the other day on Facebook:

“These metrics demonstrate why your city achieved a Triple A Bond Rating, one of only two municipalities in Texas to boast this. And what’s more amazing is it happened in 2009, in the depths of the 2nd worst recession in the history of the U.S. So to those that spread chicken little, sky is falling propaganda our city is poorly run, including political candidates trying to scare voters into voting for them, numbers don’t lie.”

He seeks to make a critical point about Amarillo’s current standing and its future.

Riggs notes that the city has acquired a AAA bond rating, which is about as good as it gets. I remember former City Manager Alan Taylor telling me with great pride that the city had achieved that rating. Taylor took a lot of credit for it, and deservedly so.

Yet we keep hearing from a faction — and I don’t think it’s much greater than that — that gripes about the city being “poorly run.” How can that be?

I ran into lame-duck City Councilman Ron Boyd today and railed to him about the complainers. Obviously, I was “preaching to the choir,” as the saying goes. The city can boast of its excellent bond rating; it can be proud of its low tax rate; it can take pride in the huge new infrastructure improvements planned for the western corridor of Loop 335.

The city, moreover, has laid the groundwork for a downtown renovation strategy that, to my way of thinking, makes sense. It is doable. It can be done without burdening property taxpayers. It will rely on revenue generated by people visiting here from elsewhere who pay hotel-motel taxes.

And yet there are those who contend the city is run poorly?

What in the name of civic pride is going on here?