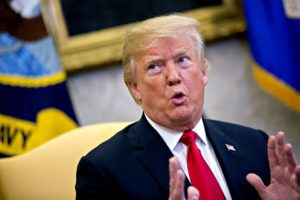 Vanity Fair has published an article in which Bill Gates, the Microsoft co-founder and billionaire philanthropist, has confirmed what many of us have believed all along about Donald John Trump Sr.

He’s not the sharpest tool in the shed.

Gates has revealed that he had to explain to the president of the United States that HIV and HPV are different diseases, that produce different outcomes. Trump couldn’t grasp the difference between the virus that makes one susceptible to AIDS  and human papillomavirus, which is an STD that can lead to cervical cancer.

As Vanity Fair reports: “Both times he wanted to know if there was a difference between H.I.V. and H.P.V., so I was able to explain that those are rarely confused with each other,” Gates told the crowd.

Trump keeps boasting about how he went to the “best college,” and how he performed so well academically. Maybe he did back in the day. However, his business career after completing college took him down a path that didn’t prepare him in any way imaginable for the job he inherited when he was elected president of the United States.

His lack of preparation presents itself continually in the clumsiness of his public remarks, such as the time he told a roomful of Israelis — in Jerusalem after arriving from Saudi Arabia, “We just got back from the Middle East.”

Dennis Hastert was a high school teacher and coach. Then he went into politics.

After that he rose to become speaker of the U.S. House of Representatives, earning a couple hundred grand a year while serving as Man of the House.

Now it comes out that he’s been indicted on various charges alleging illegal payments of money to keep someone known as Individual A quiet.

The money totaled, according to the indictment, about $3.5 million.

Here’s my question: How does a former teacher/coach-turned politician come up with that kind of alleged hush money?

Oh, and there’s this issue of sexual abuse of at least one young man.

The man’s sister has come forward to allege that Hastert abused her older brother when the boy was in high school. The boy grew up, but then died of AIDS complications a few years ago. He’s not around to corroborate any of the allegations, but sis is making plenty of noise about it now.

Hastert has been hiding since news of the indictment broke. He’ll supposedly come out of hiding on Tuesday when he’s arraigned on the charges brought. The indictment doesn’t accuse the former speaker of sexual abuse; it centers only on the money part.

What we have here, ladies and gentlemen, is a seriously weird case that could turn into one of the bizarre scandals of modern times.

We all were teenagers once. Those who aren’t yet teenagers will get there in due course.

Those of you who are teenagers right now, well, you know everything there is to know, correct?

You know, for example, that abstaining from sex is the most fool-proof way to avoid (a) pregnancy or (b) sexually transmitted diseases.

Do you always follow the advice of your elders and abstain from sexual activity?

You can stop laughing now, and pay attention.

Texas state Rep. Stuart Spitzer, R-Kaufman, is arguing that you should abstain from sex. He wants Texas public schools to teach abstinence-only sex education. “My goal is for everyone to be abstinent until they are married,” Spitzer said during a Texas House committee hearing.

Well, Rep. Spitzer, good with that.

Here is where I should add that Rep. Spitzer also is a medical doctor. Also, as R.G. Ratliffe of Texas Monthly writes, he’s a deacon at a Baptist church in his hometown. He’s a man of deep religious faith — and I most certainly honor that commitment.

Reality needs to take hold here as the state continues this debate over the best way to teach sex education in its public schools.

And the reality is that teenagers will have sex. No matter how many times you tell them not to engage in sex before they get married, they’re going to defy you. That’s what teenagers do. It’s in their DNA.

Believe it or not, teen rebellion against parental/school/legislative authority is all part of God’s plan. Honest. It is.

I happen to agree with Ratliffe on a key point: Using religious faith to shape public policy constitutes a significant gamble. And when it involves the behavior of teenagers — those individuals who take pleasure in defying authority — then you’re asking for trouble.

Abstinence is one of those issues that needs to be taught at home and church. Parents shape their own children into who they hope they will become. I know from experience — both as a parent and as a former teenager — that as often as not you get mixed results.

It’s best to understand the inevitable. Teenagers are going to rebel and, by golly, they’re going to do things they shouldn’t do.

Having sex is one of them. How about teaching them about the risk of premarital sex — and then let them know how to avoid pregnancy and disease if they choose to ignore what they’re being taught?

Several hundred Amarillo residents are going for a walk Saturday.

It’s an annual event here, as it is in communities all across the country. They’ll walk to call attention to Alzheimer’s disease. I won’t be among them that day, as I’ll be working.

However, my heart is with them. All of them. I want them to raise money and to keep raising money to fight a killer disease with which my family and I have intimate knowledge.

Thirty years ago this week, my dear mother died quietly in her sleep. Her death certificate lists pneumonia as the cause of her death.

Alzheimer’s disease was the real culprit.

Mom was 61. She’d been in failing health for several years. A doctor diagnosed her officially with Alzheimer’s disease only four years earlier but in reality she’d been exhibiting symptoms for years prior to that diagnosis.

Those who have witnessed their loved ones vanish in this manner before their eyes understand this fundamental truth about Alzheimer’s disease: It afflicts the caregiver far more than the patient. Mom was unaware of her surroundings, of those who loved her. She didn’t know when she lapsed in and out of lucidity. But we knew it. It broke our hearts.

Alzheimer’s disease hasn’t captured the public’s imagination the way, say, AIDS or various forms of cancer have gobbled up so much of the world’s attention. Why? I guess it’s because its victims generally are older and that its not the result of unhealthy behavior. It strikes people without warning or cause.

It struck Mom that way, just as it strikes those who’ve been diagnosed with this merciless, cruel disease.

Our nation is aging. That means more Americans will suffer from this terrible affliction.

My wish — as always — is that modern medicine can find a cure, a vaccine to eradicate Alzheimer’s disease.

The Saturday walk at Sam Houston Park will raise money toward that end.

My prayer today is that the money raised will put researchers over the top in their hunt for a cure that ends the scourge of Alzheimer’s disease.

When an iconic artist and performer takes his own life at a time when he ought to be on top of the world, well, then you start examining the demons that drove him to that tragic end.

Williams was one of the world’s most dynamic entertainers. His talent was seemingly without limits. His comic genius sprang from a mind with an incalculable amount of material rolling around in it, which he unleashed with hysterical fury almost without warning.

He made people laugh to the point of crying.

Williams had his demons. They involved alcoholism and drug abuse. They cost him at least one marriage, maybe more.

Internationally acclaimed entertainers, superstars and assorted celebrities have left us from all manner of illness: AIDS, Alzheimer’s, various forms of cancer.

Yes, depression is a killer, too.

Robin Williams’s tragic end will bring this disease to our national attention.

Let’s have this discussion as we mourn our national loss.

Arizona’s state Senate has approved a bill that allows people to use their religion to deny services to gay people.

Just the other day, 2012 Republican presidential nominee Mitt Romney was asked whether he thought gay marriage posed a threat to heterosexual marriage. He expressed concern about that so-called potential threat.

And throughout the nation, all these discussions seem to rely on the assumption that homosexuality is a decision that people make.

It’s as if they awaken one day and decide: “I think I’m going to ‘become’ gay and start being attracted to people of my own gender.” Were that the case, wouldn’t it follow that straight people would make the same conscious decision?

In the interest of disclosure, I now will stipulate that at no time in my life did I ever decide to date girls. My attraction to people of the opposite sex was wired into my DNA the moment I was born, or so I always have assumed. I accepted the notion long ago that others are wired differently, and that their DNA wiring resulted in an attraction of a different kind.

I want to tell you a brief version of a long and moving story involving a friend and former colleague of mine.

His name was Tim. We worked together for several years at a newspaper in Beaumont. In the late 1980s, Tim’s appearance began to change. He was losing weight and his skin color was looking a bit pallid, but he kept working as an education reporter for the newspaper. Then, in 1988, my phone rang at home; it was a Sunday afternoon. Tim called and asked to meet with me at the newspaper. He had something he wanted to tell me.

I drove downtown and Tim and I met privately in my office.

He disclosed at that moment that he had contracted AIDS. He wanted my advice on how he should disclose that news to others. We talked about him writing an essay for the paper. He agreed to do it. He asked, “You know, of course, that I’m gay, right?” I didn’t know how to answer him. I said that I didn’t know it because we never discussed it. I, along with our other colleagues, only assumed it.

We published Tim’s essay. The response was overwhelming in the kindness expressed by those who read it. And from that moment in my office, when he revealed his medical condition, our conversational candor changed dramatically. We talked about private matters.

Tim said something later that stuck with me. “Why would I choose a lifestyle knowing I would be scorned and ridiculed?” he asked, rhetorically. That was his way of saying he was born gay and that there was nothing he could do to change that part of his life.

Tim died in 1994 of AIDS-related complications.

And I think of him often these days when current discussions turn to issues of whether gay marriage would have an adverse effect on the more traditional version of marriage and of laws lawmakers approve that give people the right to discriminate openly against people simply because of who they are.

The Arizona Senate has dishonored itself with its cold-hearted measure by allowing people to scorn others because of who they love.