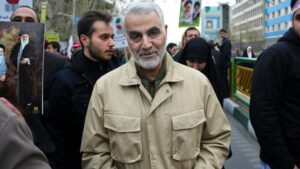 I want to be crystal clear, with no ambiguity about the events that resulted in the death of a bloodthirsty terrorist.

I support fully the air strike that killed Qassem Suleimani, the head of Iran’s Revolutionary Guard. No American I can think of is mourning the death of this individual. Indeed, politicians of all stripes are hailing the killer’s death.

What troubles me are the questions that are emerging about whether Donald Trump ordered the strike with a clear post-strike strategy in mind. I am developing growing doubt that the president had thought it out thoroughly.

Yes, the critics have emerged on the Democratic side of the congressional aisle. They were left out of the loop. Congressional leaders say they weren’t informed of the plan to hit Suleimani prior to the attack occurring. They want Congress to authorize any military action that might occur in the event Iran retaliates.

I, too, am concerned about all of that.

We also need to get real about one more important aspect of this raid. The death of Suleimani does not mean the end of the Revolutionary Guard. The Guard also already has elevated his deputy to top of the its chain of command.

Remember, too, that the May 2011 raid that killed Osama bin Laden did not extinguish al-Qaeda. Nor did the mission this past year that took out Abu Bakr al Baghdadi eliminate the Islamic State. The terror organizations are continuing their bloody campaigns against Muslims and against U.S. forces that are still fighting them on the battlefield.

It all arcs back to the most riveting question of the “global war on terror.” How will we be able to declare victory? My hunch is that we are engaging in a war with no end.

As for the death of this latest murderer, I am glad he is dead.

However, we now must be prepared to deal with the consequences.