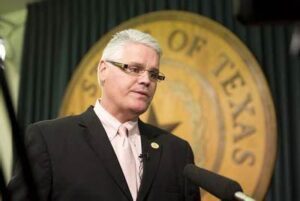 Dan Huberty should take a bow and accept this small expression of support for a courageous act he took today on the floor of the Texas House of Representatives.

The Houston Republican acknowledged to his colleagues that he is an alcoholic.

“My name is Dan and I am an alcoholic,” he told fellow legislators in an emotional speech in Austin.

Huberty was charged with drunken driving on April 23 after he crashed his car into a minivan and failed a sobriety test. The incident occurred just outside of Austin. He told his colleagues today he has been struggling with alcoholism his entire adult life.

He apologized to them and to his family and acknowledged that he has completed three of the Alcoholics Anonymous’ 12-step program toward sobriety.

It was richly deserved.

“Alcoholism is a serious disease,” Huberty said. “One that is becoming a pandemic in itself.” Yes. It most certainly has become a pandemic.

It’s not often that we see politicians lay open their emotional wounds in such a candid manner. Rep. Huberty isn’t my representative, but I want to applaud him for showing the courage it takes to find his way out of the darkness.