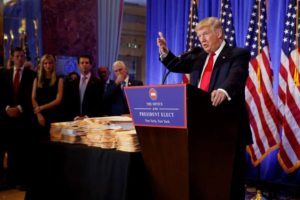 Ladies and gents, today we witnessed the opening act of what we can expect will be a long-running melodrama featuring the president of the United States and the media that report on his comings and goings.

Donald J. Trump convened a press conference and began by attacking the media. It’s no surprise, of course, given his campaign-long attack on a media he accused of “rigging” the election in favor of Hillary Rodham Clinton.

Trump won the election, though, but that hasn’t dissuaded him from continuing his full frontal assault on the media. Now he’s accusing some news outlets of putting out “fake news” relating to reports of Russian involvement in the hacking of Democratic computers.

He outshouted a CNN reporter today who wanted to ask him a question, calling his organization one of the bad guys among media organizations.

Today’s testy exchange with the media, I believe, signals a continuation of an assault by the president-elect. I expect it fully to continue once he actually becomes president.

It’s part of the formula that Trump parlayed to the Republican Party nomination; he appealed to the base of his party that hates the media as much as Trump now says he despises them. This is so very interesting to me, given the president-elect’s ability to play the media like a fiddle during his nomination fight and then his winning presidential campaign.

So … let’s all strap ourselves in for what appears to be a wild ride atop a rip-snorting bull.

The media’s job is to probe, to question on behalf of the public. The president’s job — whether he likes it or not — is to answer the media’s inquiries. Something tells me the new president will resist answering those questions whenever he can. 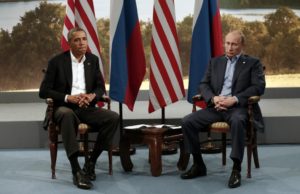 Donald J. Trump doesn’t believe the findings of the CIA and other intelligence officials that Russia sought to influence the 2016 presidential election.

I’ll presume, therefore, that he won’t take any action against them.

But here’s the thing, dear reader: We have a president on duty who does believe the CIA analysis, who has expressed outrage at the idea of foreign intervention in our electoral process — and who has vowed that he will act “in our own time” to retaliate against the hacking nation.

President Obama is in office until Jan. 20. It is sounding increasingly likely that he’ll do something to punish the Russians for what the CIA and others have said they’ve done. The specifics of what they did remain unclear, but the president’s longtime adversary, Russian strongman Vladimir Putin, also appears complicit in what has transpired.

My guess would be that Obama will act in ways that might be difficult to undo. Trade sanctions? Diplomatic pressure? Retaliatory hacking of Russian cyber activity?

Obama said on National Public Radio this morning that some of the options being considered would be public and would be reported; other options might be done in secret. That’s the beauty — if you want to call it such — of being in charge of a vast intelligence network that can do these things undercover, out of sight.

The Russians need to know that what they did cannot be tolerated by any government, let alone by the United States of America.

If the new president is going to dismiss the fact-based information gathered by the CIA, then it falls on the current president to act while he still has the stroke to do so.

Go for it, Mr. President!