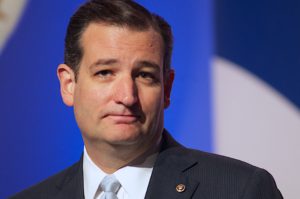 There’s been no shortage of outrage being expressed today over the violence that erupted in Charlottesville, Va.

It has come from across the partisan divide. Republicans and Democrats alike have spoken eloquently about their outrage at the violence perpetrated by the white supremacists who gathered there to make whatever statements they want to make. They have spoken as one.

I want to share a statement that came from U.S. Sen. Ted Cruz, the Texas Republican who’s been a target of this blog on many occasions over the years. Today, though, I want to applaud Sen. Cruz for speaking eloquently and passionately about an incident that has consumed the nation.

It’s tragic and heartbreaking to see hatred and racism once again mar our great Nation with bloodshed. Heidi’s and my prayers are with the loved ones of those killed and injured in the ongoing violence in Charlottesville. The First Amendment protects the rights of all Americans to speak their minds peaceably, but violence, brutality, and murder have no place in a civilized society.

The Nazis, the KKK, and white supremacists are repulsive and evil, and all of us have a moral obligation to speak out against the lies, bigotry, anti-Semitism, and hatred that they propagate. Having watched the horrifying video of the car deliberately crashing into a crowd of protesters, I urge the Department of Justice to immediately investigate and prosecute this grotesque act of domestic terrorism.

These bigots want to tear our country apart, but they will fail. America is far better than this. Our Nation was built on fundamental truths, none more central than the proposition “that all men are created equal, that they are endowed by their Creator with certain unalienable Rights, that among these are Life, Liberty, and the Pursuit of Happiness”. 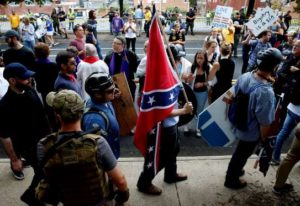 Virginia Gov. Terry McAuliffe has declared a state of emergency in Charlottesville, home of the University of Virginia and a community associated with one of our greatest Americans, our nation’s third president, Thomas Jefferson.

Donald J. Trump has condemned the violence that has erupted there, as he should have done. “We ALL must be united & condemn all that hate stands for. There is no place for this kind of violence in America. Lets come together as one!” the president said via Twitter. Exactly, Mr. President.

White nationalists, some of them wearing Ku Klux Klan garb, are protesting the removal of a Confederate statue. Their presence has prompted counter protests; thus, the clash that is threatening to blow the community apart.

I keep noticing something about the white nationalists marching through Charlottesville. It’s the presence of the Stars and Bars, the flag generally associated with the Confederate States of America, which seceded from the Union in 1861 and commenced the Civil War.

We’ve been debating for the past 150 or so years about the reason for the Civil War. Was it about slavery? About race? Was it about states’ rights? Or southern “heritage”?

Defenders of the Confederacy keep suggesting the Civil War wasn’t about race, or about slavery. They point to the “heritage” issue as the linchpin issue, and that the states didn’t want the federal government dictating to them how to run their internal affairs.

OK. If that’s the case, why do these white nationalists keep marching under the Stars and Bars? What does the presence of the Confederate symbol mean in that context?

For that matter, I should note, too, that one sees that symbol displayed with great “pride” at KKK rallies. Someone will have to explain to me the juxtaposition of the Stars and Bars and the KKK/white nationalists.

I’m all ears. You may now have the floor.

I cannot take credit for this observation but I’ll share it anyway.

It comes to me via social media and the individual who sent it poses a fascinating notion.

He said that it took Donald J. Trump three days to say something about the white supremacist who is accused of stabbing two people to death in Portland, Ore., after they sought to break up a verbal argument between the suspect and two others — one of whom is a Muslim.

Then … some Muslims kill several people in London before being killed by police. Trump fired off a response in an hour!

Is this how the president plans to put “America first”? 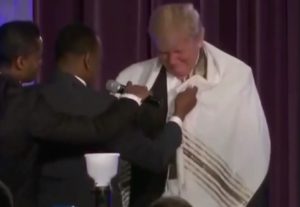 I cannot fathom what transpired today in that church in Detroit.

Donald J. Trump, of all people, is now seeking to don the mantle as the nominee of “the party of Abraham Lincoln.”

It was an amazing thing to see, Trump speaking to the black congregants seated before him.

“Our nation is too divided. We talk past each other, not to each other, and those who seek office do not do enough to step into the community and learn what is going on,” Trump said.

“I’m here today to learn so that we can together remedy injustice in any form, and so we can also remedy economics so African-American communities can benefit economically through jobs and income.”

Amazing, yes? This is the very same fellow who declared that African-Americans are enrolled in inferior schools, who live in neighborhoods that are less safe than combat zones in Afghanistan. He has infuriated minorities of all demographic groups with his incendiary rhetoric and by his abject failure to condemn in the strongest possible language any comments of support from infamous former Ku Klux Klansman David Duke.

Now he wants voters to believe he is going to unite Americans, that he intends to do right by all of our citizens.

Trump steps into a church, makes a speech and then disappears. And that is supposed to be a demonstration of a politician who vows to step “into the community and learn what is going on”? 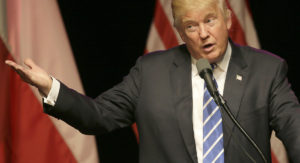 Donald J. Trump isn’t bashful about condemning groups or people with which he has issues.

*  Illegal immigrants? They’re “rapists, murderers, drug dealers. And there’s a few good ones, I’m sure,” he has said.

* Radical Islamic terrorists? He wants to ban all Muslims from entering the country just to be sure that none of those terrorists sneak in.

* “Politically correct” rhetoric? Why, he just cannot stand those who hide behind his version of “political correctness.”

What about racists? White supremacists?

When he was asked about statements from longtime Klansman David Duke that seemed to support the Republican candidate’s views, Trump said he “didn’t know” Duke; he said he didn’t know about white supremacists.

And then, just recently, when the crap hit the fan over an ad that featured a picture of Democratic candidate Hillary Rodham Clinton, a pile of $100 bills and a symbol that looked to many of us like a Star of David, Trump took the ad down. Critics jumped on the ad as an anti-Semitic statement. Then we learned that the ad first appeared on a white supremacist website.

Trump has yet to condemn Duke — other than to say he “condemns Duke.” And he has yet to issue anything resembling a declaration of condemnation of those groups.

Is the GOP nominee-to-be a flaming racist? I won’t say “yes.”

It is fair and reasonable, though, to wonder just why he doesn’t condemn those individuals and hate groups with the same zeal he condemns others.

If you want to. 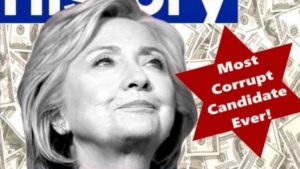 Gosh, I always thought I knew what the Star of David looked like.

It’s an important symbol of the Jewish faith. I saw it daily while I was touring Israel in May-June 2009. The Israelis fly their national flag proudly and, yep, it has a Star of David on it.

I must have been seeing things.

You see, a campaign ad for Donald J. Trump showed up on a tweet that showed Democratic presidential candidate Hillary Clinton and an image that looked for all the world like a Star of David, along with the words “Most Corrupt Candidate Ever.”

The ad drew immediate criticism from those who complained it was anti-Semitic. Trump’s campaign took it down immediately and then said the star on the ad didn’t portray the Star of David; Trump — the Republican presidential candidate — called it a “sheriff’s star.”

Two quick points and then I’m out.

Two, Trump took the ad down right away after criticism arose about its tone and tenor.

If the ad was as innocent as Trump’s campaign says it is, why did the white supremacists run it and why was the campaign so quick to remove it?

Steve Scalise must not have gotten out much before he was elected to Congress in 2008.

There can be no explanation for his not understanding that any organization associated with someone named David Duke would be pure poison, toxic and a group to avoid at all costs.

He didn’t hear the news about Duke, apparently. He must not have known that Duke is a (former) Ku Klux Klansman, a hater of blacks and Jews and someone whose ideas about anything under the sun are anathema to the principles of inclusion.

Did he disavow the white supremacist group’s world view the moment he learned of David Duke’s association with it? Gosh, I haven’t heard that he has done that. Has anyone else heard such a thing?

Scalise is now in damage-control mode, trying to fend off the critics who condemn his speech.

The single question I have is this: Did he know that David Duke was the group’s founder when he agreed to speak to its membership?

That darn issue of race relations has just bitten the Republican congressional leadership right in the backside.

Don’t you just hate it when that happens?

Scalise says now he “regrets” his “error in judgment.” He condemns the views of “groups like that.”

Hey, it was a dozen years ago. No harm done now, right? He spoke six years before entering Congress.

Should he quit his leadership post? Should the congressman quit his House seat? I’m not going there until we know more about what he said and the nature of the invitation.

It does kind of remind me of what happened when former U.S. Sen. Trent Lott, R-Miss., had the poor judgment to say something kind about the late Sen. Strom Thurmond’s 1948 presidential campaign. That was when ol’ Strom broke away from the Democratic Party — of which he was a member back then — to run for the White House as a Dixiecrat. He was a segregationist back then — and proud of it, too! He just didn’t like mixing with black people — even though, as we would learn later, he mixed it big time with an African-American woman, with whom he produced a daughter.

Lott said this about Strom: “When Strom Thurmond ran for president, we voted for him. We’re proud of it. And if the rest of the country had followed our lead, we wouldn’t have had all these problems over all these years, either.”

Oh, brother. That got Lott into some serious trouble. Lott stepped down as majority leader.

Two questions: Did the invitation to Scalise come from a group — the EURO Conference — identified easily as a white supremacist organization? And did he know of Klansman David Duke’s association with it?

The deal-breaker well might be the Duke involvement. Let’s come clean, shall we?