An interesting idea is being floated by those with some stake in the president’s next selection for the U.S. Supreme Court.

It goes like this: Donald Trump should wait for special counsel Robert Mueller to finish his probe into the “Russia thing” before making his choice known. Think for a moment about this. What if Mueller determines there is some criminality involved in the Trump presidential campaign’s dealing with Russian goons who meddled in our 2016 election? What happens if that case ends up eventually before the nation’s highest court?

Does the president deserve to select someone who might have a material interest in determining the legal fate of a case involving the president, his campaign and, indeed, the presidency itself?

There’s plenty of chatter already that Senate Majority Leader Mitch McConnell should allow the midterm election to determine the Senate composition before sending this nomination up for a Senate vote; the Senate must confirm this appointment. McConnell did manage to block President Obama’s nomination of Merrick Garland in early 2016 shortly after the death of Justice Antonin Scalia. Obama had nearly a year left in his presidency, but McConnell said the Senate needed to wait until the presidential election before considering anyone for the court.

Mueller well might be getting near the end of his exhaustive probe. Should we wait for the special counsel to finish his task and deliver his report to America? Sure. Why not?

The midterm elections are four months away. The entire U.S. House of Representatives is up for grabs, along with one-third of the U.S. Senate.

But forget about the individual seats taking center stage. My hunch is that the Supreme Court will rise to the level of Campaign Issue No. 1, particularly as it involves the Senate.

Senators will get to decide who succeeds Anthony Kennedy, who retires at the end of July from the seat he has held for 30 years on the nation’s highest court.

Kennedy is considered a “swing vote.” Donald Trump is likely to nominate a hard-core conservative to succeed him. The balance of power on the court could change for decades to come.

Do you think the federal judiciary is “above politics”? Guess again.

Kennedy is seen as a “swing vote” on key decisions, siding at times with the liberals on the court, but mostly with the conservatives. He was, after all, nominated by President Reagan.

The fight will be fierce. It will get ugly. It will show us just how creative Senate Democrats can get in their vow to fight this nomination to the hilt — if they decide to take it all the way.

I’ll make this prediction, though: If this fight gets as bloody as many of us believe it will, do not expect any of the liberals on the court to leave the bench for as long as Donald Trump is president of the United States.

And let us put down forever any notion that politics doesn’t drive the (a) nomination of a justice or (b) his or her confirmation by the U.S. Senate.

I totally understand that court rulings can be complicated and that there often is more than meets the eye.

Thus, the Texas Supreme Court ruled that Houston city employees aren’t guaranteed all spousal rights if they’re married to someone of the same sex.

The state’s highest civil appellate court said in its ruling that the U.S. Supreme Court’s ruling that legalized gay marriage didn’t cover all the benefit rights that one thought might accrue for the same-sex spouses. As the Texas Tribune reported: “As part of a case challenging Houston’s benefits policy, the Supreme Court suggested a landmark ruling legalizing same-sex marriage does not fully address the right to marriage benefits. Justice Jeffrey Boyd, writing on behalf of the court in a 24-page opinion, said there’s still room for state courts to explore the ‘reach and ramifications’ of the U.S. Supreme Court’s 2015 ruling in Obergefell v. Hodges.”

I admit readily that I’m a bit slow on the uptake at times. However, as I read the U.S. Supreme Court decision on this matter, I am certain I read something about the court deciding that the 14th Amendment’s “equal protection” extended to gay couples just as it does to all American citizens. The U.S. Constitution is clear in its guarantee of equal protection under the law to every American; it doesn’t take Americans’ sexual orientation into account.

Why, then, aren’t same-sex spouses entitled to the same rights as those involved in heterosexual marriages?

My hope would be that the U.S. Supreme Court could clear up, somehow, this apparent discrepancy. 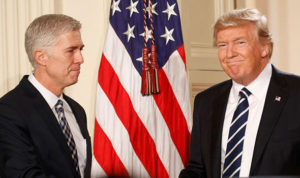 All this hyperventilating over Donald Trump’s choice for the U.S. Supreme Court is making me dizzy.

The president tonight brought out Neil Gorsuch, a judge on the 10th Circuit of Appeals, as his nominee for the nation’s highest court.

He’s a conservative, just as Trump promised. He is a “strict constitutional constructionist,” again as Trump vowed. He’s also a disciple of the late Justice Antonin Scalia, as Trump pledged.

Now we’re hearing talk about the “nuclear option” that Senate Democrats might employ to stop Gorsuch’s confirmation. They’ll oppose this fellow, seemingly as payback for the shabby treatment Senate Republicans leveled against President Obama’s choice to succeed Obama. Remember that? Senate GOPers said within hours of Scalia’s death that they would block anyone the president nominated. Obama selected Merrick Garland and the Senate didn’t even give him a hearing and a vote.

I want to make a couple of points.

One, I detest the notion of Donald Trump nominating anyone to the court. But he won the presidency without my vote. He won enough electoral votes to take the oath of office. Thus, he earned the right to choose anyone he wants.

Gorsuch isn’t my kind of justice. But someone else is the president.

Two, the ideological balance of the U.S. Supreme Court is not going to change when — or if — Gorsuch is confirmed. Scalia was a conservative icon. He was a heroic figure among political conservatives. Placing another judicial conservative on the high court restores the court’s narrow 5-4 conservative bent.

I feel compelled to note that the court — with that narrow conservative majority — made two decisions that riled conservatives, um, bigly. It upheld the Affordable Care Act and it declared same-sex marriage to be legal under the 14th Amendment’s equal protection clause.

Would a Justice Gorsuch change that equation? I don’t see it. A nominee to succeed, say, one of the liberals on the court would most assuredly prompt a titanic political battle … as it should.

None of this will matter, of course, to Senate Democrats who are enraged at the president over many — seemingly countless — issues. His behavior in the first 10 days of his presidency, culminating with his firing of an acting attorney general over her refusal to defend Trump’s paranoid refugee ban, has angered Democrats to their core.

Thus, the fight is on.

It pains me to acknowledge it, but I must. Donald Trump vowed to nominate someone from a list of 20 or so jurists he revealed during his campaign. He has delivered on his pledge.

Judge Gorsuch isn’t to my liking. Moreover, my candidate lost. The other guy won. As they say, elections do have consequences. 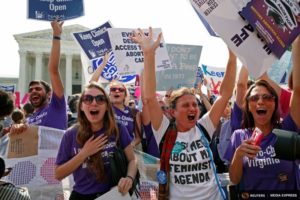 It had been some time since I looked at the constitutional justification for the landmark Roe v. Wade ruling that legalized abortion in the United States.

So today, I did in the wake of the Supreme Court’s ruling that strikes down a Texas law that made it more difficult for women to terminate a pregnancy.

Roe was decided on the “due process clause” of the 14th Amendment to the U.S. Constitution, which the court said in its January 1973 ruling guaranteed a woman’s right to an abortion.

Yes, I am aware that constitutional purists will declare that “abortion” isn’t even mentioned in the Constitution, unlike, say, “the right keep and bear arms.”

But these amendments cover a multitude of rights that aren’t necessarily mentioned by name in the nation’s government framework.

The court today ruled 5-3 that House Bill 2 was too restrictive and that it violated a woman’s right to end a pregnancy. The bill became law in 2013 after that famous filibuster launched by then-state Sen. Wendy Davis, D-Fort Worth, who temporarily halted the bill’s progress in the waning hours of the Texas Legislature.

Not to be deterred, then-Gov. Rick Perry called a special session and the Legislature enacted the bill anyway.

According to the Texas Tribune: In a 5-3 vote, the high court overturned restrictions passed as part of House Bill 2 in 2013 that required all Texas facilities performing abortions to meet hospital-like standards — which include minimum sizes for rooms and doorways, pipelines for anesthesia. The court also struck down a separate provision, which had already gone into effect, that requires doctors to have admitting privileges at a hospital within 30 miles of an abortion clinic.

The result of HB 2 was to force clinics that provide abortions to shut down. It made access to the procedure unconstitutionally difficult for women to obtain.

The court decision was swayed by Justice Anthony Kennedy’s siding with the liberals on the court.

Is this a happy ruling? No one should be happy when the issue involves an issue that is as emotionally draining and wrenching as this. Women have been entitled to make these decisions ever since the Roe ruling — which also arose from a Texas case.

I feel the need to add that to be “pro-choice” on this issue should not be construed as being “pro-abortion.” Would I ever counsel a woman to obtain abortion? No. Then again, it’s not my call to make. Nor should it be the government’s role.

Yes, this was a difficult call for the nation’s highest court to make. It was the correct call.