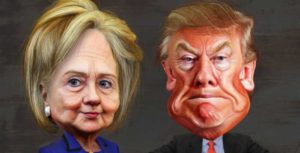 It’s time to make an admission.

Others already have said it, but I’ll chime in with this: The election this autumn presents the unhappiest choice I’ve ever faced since I voted in my first presidential election way back in 1972.

At this very moment, I am not yet rock-solid certain what I’m going to do when I go to the polling place.

Republicans have nominated a certifiable buffoon/goofball/fraud/con artist as their presidential nominee. Donald J. Trump is unqualified at every level one can mention to sit in the Oval Office and make decisions as our head of state and government.

Democrats have nominated someone who is far more qualified — on paper — than Trump. Hillary Rodham Clinton, though, is trying to face down that darn “trust” issue. Is she to be trusted implicitly to tell us the truth when we need to know it? That is where I am having trouble with her candidacy.

I’ve already declared in this blog that Democrats have gotten my vote in every presidential election. The first presidential ballot I ever cast, for the late Sen. George McGovern, remains the vote of which I am most proud.

I happened to be — if my Marine Corps friends don’t object to my stealing their service’s motto — one of the “few, the proud” to vote for Sen. McGovern. Then came Watergate and the resignation of President Nixon two years later and one became hard-pressed to understand how it was that the president won by as large a landslide as he did.

The next election four years later gave me a bit of heartburn. I truly admired President Ford and I didn’t really feel comfortable with Jimmy Carter. Well, you know what happened, right?

I’ve been comfortable with my choices every election season since.

You can count me as one of the millions of Americans who’s unhappy with the choices we have. I’ll have made up my mind in time for Election Day.

I’ll just keep it to myself.

Here’s what I did this week. I voted early.

I’ve said it to anyone who’ll listen that I hate to vote early. I did it this week because next week I’m going to be busy throughout the entire Election Day.

I’ll be working as an exit pollster representing news gathering organizations: all the major cable networks, the broadcast networks and The Associated Press.

A polling research outfit has hired me to interview voters leaving the Randall County Courthouse Annex in south Amarillo. Their answers will be confidential and my goal is to give questionnaires to every other voter who leaves the annex. Good luck with that.

So, I voted early at the annex.

It still isn’t nearly as much fun as standing in line on Election Day, chatting with fellow voters and awaiting my turn to cast a ballot on one of those fancy-shmancy electronic voting machines.

There remains a certain pageantry to voting. People in countries where voting isn’t the norm have stood for hours, even days, waiting to do their civic duty. Surely you remember the 1994 presidential election in South Africa, the one that elected Nelson Mandela. Black South Africans who never before had been given the opportunity to vote stood in line for days awaiting their turn at the polling place. Imagine something like that happening here.

I didn’t vote in all the races. I left some of them blank. Rather than just cast a vote against someone because I don’t like their views or their party’s views, I didn’t vote for candidates about which I know too little.

Yes, I split my ballot. I cast votes for some Republicans as well as Democrats.

I feel good that my vote has been recorded. It’ll be spit out when the polls close Election Night at 7.

Having declared to you all that I’ve actually voted, I hereby reserve the right to gripe when the folks who actually win take office and fail to run things the way I want them run.