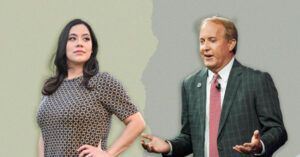 Of all the contests on the Texas ballot in this midterm election cycle, one of them presents the greatest opportunity for joy … and also for profound disappointment.

It’s not the governor’s race. It’s the next one down on the ballot, the contest for Texas attorney general.

I keep hearing chatter that it might be the closest statewide race on the ballot, the one contest that gives Democrats their greatest chance of breaking the death grip Republicans have had on the state elective offices for nearly three decades.

The GOP incumbent, Ken Paxton, is seriously damaged goods. Yet here he is, seeking a third term after winning re-election in 2018 while under felony indictment for securities fraud. In 2022, he’s still under indictment.

Oh, but there’s more. Seven of his top legal assistants quit the AG’s office complaining about what they allege is criminal conduct. They blew the whistle on what they contend is corruption. The FBI has launched an investigation into Paxton’s conduct.

The man has embarrassed the state. His Democratic foe is Rochelle Garza, a civil-rights lawyer from the Valley. She reports that the race is narrowing. Indeed, polling from around the state suggests a tightening contest.

What gives me hope is that Garza is as clean as they come. She can hold her own background up to Paxton’s shady behavior, which became evident when the Collin County grand jury indicted him in 2015 on an allegation that he failed to disclose his relationship with an investment firm to potential customers.

But there’s even more to pore through. Just this past week, Paxton ran like a frightened puppy when a federal process server showed up at his McKinney home to serve him papers to testify in a court proceeding. Paxton said he didn’t know who was standing outside his house; but then we learned that he knew several days earlier that he would be served the summons.

The guy is a worm. A weasel. A coward.

For the life of me I do not understand how this guy continues to have any standing among Texas voters.

A grand jury in his home county indicts him on a felony charge; his top legal team bails; the FBI launches a probe into alleged misconduct; he hides from a process server.

And on top of all that, the AG has been front and center in promoting The Big Lie, that Donald Trump was the victim of an electoral heist in the 2020 presidential election.

Can’t we do better than having someone so damaged as our state’s top law enforcement official? Well, we can! The question: Will voters show the good sense to reject this clown?