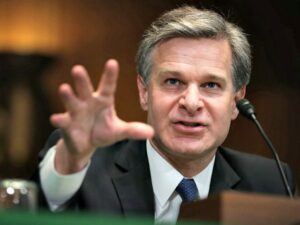 I need to set the record straight in a brief response to one of the criticisms being leveled at the FBI in the wake of its searching Donald Trump’s Florida home for evidence of criminality.

It’s this idiotic notion that the FBI is being “weaponized” to hunt for crimes that allegedly don’t exist. I happen to believe they do exist and that the federal judge who issued the warrant believes so, too.

Now for setting the record straight.

Thus, Wray is a “Trump guy” in the strictest sense of the word. However, Wray also is a law enforcement pro. He is a seasoned prosecutor with many years of experience looking for bad guys.

To suggest that Christophe Wray would turn the FBI into a political weapon would be to deny the man’s long and distinguished history as a career prosecutor. It also is to defame his reputation.

FBI Director Wray doesn’t need me to defend him. I just feel the need to remind those critics of the FBI search (I will not call it a “raid”) that the FBI boss is an official dedicated to finding the truth behind a potential criminal act.