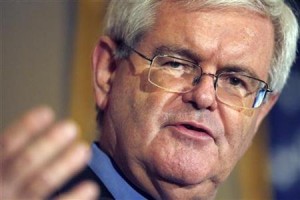 Newt Gingrich is grasping at anything to minimize the stunning news overnight that the FBI has searched the Florida home of Donald J. Trump for evidence that he might have committed a crime — or three — while serving as president of the United States.

The Republican fire-breather/former speaker of the House said this: “I think what’s even more troubling and what every American, whether you’re a Democrat, Republican, doesn’t matter, liberal, conservative, doesn’t matter. If 30 FBI agents can take over the house of a former President of the United States and probable candidate for president, what can they do to you?”

I can answer Newtie’s question. Are you ready?

The FBI can’t do a damn thing to any American if they haven’t broken federal laws.

Gingrich: If FBI Agents Can Raid The Former President, What Can They Do To You? | Video | RealClearPolitics

What fu**ing difference does it make if the subject of a federal investigation is a former POTUS or someone who might be a candidate for the office?

Attorney General Merrick Garland has spoken with crystal clarity on the subject of his investigation into the events of 1/6, its aftermath and its causes. “No one is above the law,” Garland said. He clarified that statement by declaring, “I mean, ‘no one’ is above the law.”

The issue isn’t about “control” of our lives, or about bullying of a president who well might have broken several laws. It is about whether our democratic system of government is worth protecting against those who would seek to destroy it.

Newt Gingrich is entitled to his opinion. I am entitled to mine. They differ. I happen to believe I am correct and Newtie is wrong.