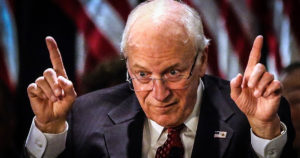 This makes me so mad I could just spit. Dick Cheney came to his daughter’s defense with a stellar argument that called Donald John Trump a “coward” who “lies to his supporters.”

The former vice president of the United States said a “real man” wouldn’t lie the way Trump does.

Of course he is right! I would be leading the cheers for the former VP who served for two terms during George W. Bush’s presidency, except for this little thing. Dick Cheney also is a liar.

I don’t say this with any sort of cavalier attitude. I want the former veep’s ad to sway voters to his daughter’s corner as she battles for re-election to the U.S. House seat that her father occupied before taking on the job of White House chief of staff for President Ford.

Dick Cheney, though, spooned up a major dose of snake oil when George W. Bush became president. He persuaded the president that Iraq possessed weapons of mass destruction, chemicals that it would use against us. He also told us that Saddam Hussein — the late Iraqi dictator — played a role in the 9/11 attacks on Washington and New York City. Neither allegation was true.

We went to war with Iraq in March 2003 and lost nearly 5,000 American lives in the process. And for what purpose? To retaliate for lies conveyed by the then-vice president and others within the Bush administration.

This is the kind of thing that sticks to people’s backsides. It’s indelible. No matter how much Dick Cheney might pretend to be a man of high honor and integrity — who tells the truth all the time — we cannot deny that he lied about WMD and the culprits behind 9/11.

I just wish Liz Cheney could have found another ally to launch this attack on Donald Trump.