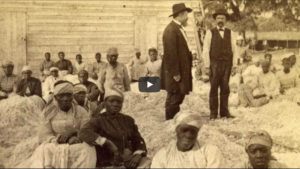 This cannot possibly be real, cannot be serious, cannot be accurate. Some Texas educators now want to introduce a new form of study … changing the term “slavery” to something called “involuntary relocation.”

Good, ever-lovin’ grief! This can’t be happening. Oh, but it is happening.

A group of Texas educators have proposed to the Texas State Board of Education that slavery should be taught as “involuntary relocation” during second grade social studies instruction.

The group of nine educators, including a professor at the University of Texas Rio Grande Valley, is one of many such groups advising the state education board to make curriculum change requests. This summer, the board will consider updates to social studies instruction a year after lawmakers passed a law to keep topics that make students “feel discomfort” out of Texas classrooms.

How do I say this? The enslavement of human beings during the formation and early development of the United States is part of who we are as a nation, who we became and who we sought to correct.

To suggest that our children no longer should be taught what slavery meant to millions of our ancestors is to deny the facts as they occurred.

We all have been told at times that “the truth hurts.”

Fine. Let it hurt. Slavery is the most egregious blot on our nation’s history. Our children should learn about it in its rawest form.