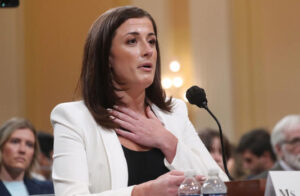 Donald Trump and his cabal of cultists can complain all they want about the allegedly low “rating” the insurrection hearings are getting.

What matters, though, is the testimony that is being produced from these televised events. Not only that, the witnesses are talking to a limited audience. They are speaking to prosecutors and investigators working for the Department of Justice.

Others around her said incriminating things about the 1/6 insurrection … and she was present to hear what they said!

Hearsay? That’s hardly a defense when someone delivers the kind of damaging goods that Hutchinson dropped onto the laps the1/6 House select committee examining the insurrection.

Cassidy Hutchinson told a compelling — and damning — tale of corruption within the White House on that horrible and horrifying day as Donald Trump’s time as president was staggering to its conclusion.

Whether the vast bulk of Americans are not yet paying attention doesn’t matter one damn bit to those who are paying attention. They are the legal professionals who are preparing to decide whether to file criminal charges against those who did the bidding of the most corrupt president in U.S. history.

And, yes, whether they will file charges against the president himself. It looks for all the world to me that the Justice Department is being left with few choices other than to take a historic leap.