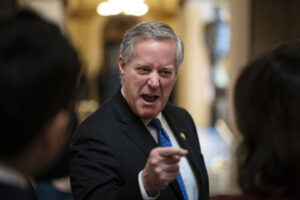 Memo to Mark Meadows: If you believe in the “rule of law,” as you have said you do, then you by all rights should have no problem answering a House 1/6 select committee subpoena seeking your testimony into what happened on the day of the insurrection against the U.S. government.

The White House chief of staff has gotten the subpoena. He has refused to talk to the committee.

Now we hear from his former top aide, Cassidy Hutchinson, who testified in great detail this past week about what she saw and heard from Meadows. It isn’t pretty … for Meadows, at least.

The ex-White House chief of staff needs to set aside his frothy featly to Trump and talk to the committee about all he knows about that day.

Meadows served in Congress prior to making the move to the White House. He knows the players. He understands, also, the penalty for failure to talk to the committee.

Since he took over as White House chief of staff, though, he has become uncooperative and defiant.

My advice to Meadows? Lose the attitude, fella!