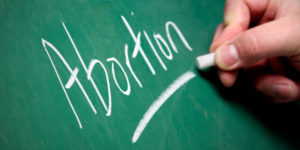 I need to stipulate something up front that shouldn’t need to be stated, which is that we all live in what we call a “representative democracy.”

What does that mean? To me it means that the men and women who serve in our nation’s public offices need to represent the will of the people they govern.

OK, are we clear on that? Good! Then consider this:

Every reputable public opinion poll taken reveals that a substantial majority of Americans favor maintaining abortion rights for women. Gallup, Harris, Quinnipiac, Roper, Ipsos — all of ’em — tell us that most Americans want women to have the right to govern their own bodies.

The U.S. Supreme Court, though, today said the U.S. Constitution does not guarantee a woman’s right to terminate a pregnancy. The ruling comes as the court has struck down the Roe v. Wade landmark ruling that stood as settled law since it was announced in January 1973. Women no longer are able to obtain an abortion.

Most Americans believe in providing abortion rights for women. A minority in Congress and in our legislatures believe something else.

Where I come from, when the minority rules supersede the beliefs of the majority, we call that “governing by tyrannical means.”

Is that what we are becoming?