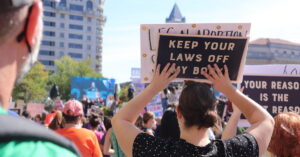 The U.S. Supreme Court’s stunning decision announced today that tosses aside a long-settled law enabling women to obtain legal abortions well could create a midterm campaign issue for the ages.

The court ruled 6-3 that the Constitution does not guarantee a woman’s right to an abortion, which was the basis for the1973 Roe v. Wade ruling that legalized the procedure in the United States.

Conservatives are joyous at the ruling. The rest of us? Well … we’re not.

The midterm election now could hang on whether enough voters are concerned enough to elect members of Congress, governors and state legislators who believe that women have a right to terminate a pregnancy.

My hope is that it does energize the electorate. That it does stem the so-called “red wave” that threatens to sweep Democrats out of control in Congress. That it does elect state legislators and governors in states that already have dropped the hammer on hapless women who now no longer can obtain an abortion legally.

The consequences of this decision are far-reaching and frightening to many women across the land. It won’t end abortion. It only makes it more dangerous as desperate women seek them. What then? Who cares for women whose bodies are devastated by botched procedures?

We hear it said over and over: that “elections have consequences.” We now are paying for the travesty that occurred in 2016 when Donald J. Trump slithered his way into the White House and — with the help of a GOP majority in the Senate — managed to get three individuals confirmed to the SCOTUS.

The right-wing cabal on the high court has set the cause of women’s rights back for decades to come. It now falls on the rest of us to ensure that our ballots count in this year’s midterm election … and beyond.