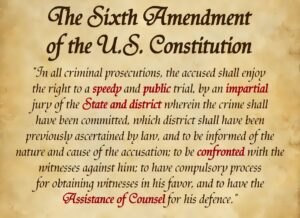 In all criminal prosecutions, the accused shall enjoy the right to a speedy and public trial …

— Sixth Amendment to the U.S. Constitution

A part of me wants to laugh out loud at that statement from our nation’s governing document. You see, it doesn’t require a speedy and public trial. It merely grants people accused of crimes the “the right” to one.

Unless, of course, “speedy and public” is a code for conviction in the eyes of the accused and his or her legal defense team.

Texas Attorney General Ken Paxton has been awaiting a speedy and public trial for seven years. Yep, seven years ago, the newly elected AG became the newly indicted AG when a Collin County grand jury charged him with securities fraud.

The AG is running for re-election to a third term in office. His Republican runoff opponent, Land Commissioner George P. Bush has been trying to make a dent in the AG’s armor by reminding Texas Republicans that they might have a crook working as the state’s top lawyer.

I am afraid George P’s message will go unheeded and that Paxton will be renominated by the party to run for re-election this fall.

This isn’t right. The case has bounced around from court to court. Paxton and his team have employed every legal trick at their disposal to hem and haw their way out of standing trial.

I happen to have faith in our judicial system, even when it stumbles and fumbles along, as it has in this case. I merely want to the case to be adjudicated.

Yes, my faith in the court system has faced serious challenges over many years. O.J. Simpson’s acquittal on a murder charge in 1995 is the most glaring example. The nation watched the sh** show trial drag on for months on end, only to watch in disbelief as the jury returned a not-guilty verdict after four hours of deliberation.

I disagreed with the verdict, but I accepted it. I also understood how the jury could reach the decision it did in so little time, given the defense put on by Simpson’s legal team led by the late Johnnie Cochrane. He planted doubt early on in the minds of the jurors.

But that’s the way it goes in this country.

Paxton should have gone to trial long ago. My own bias tells me he should already be locked up in the slammer. I would accept an acquittal just as I did when O.J. was allowed to walk free and spend the rest of his life “looking for those” who killed his ex-wife and her boyfriend.

I am sure Ken Paxton would embrace publicly the Sixth Amendment’s promise of a speedy and public trial. Except that it wouldn’t serve his political purposes.

2 thoughts on “‘Speedy and public trial’?”