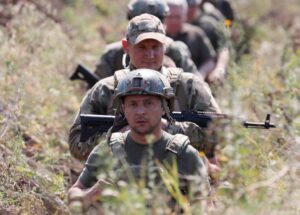 The late U.S. Sen. George Aiken, a great Republican from Vermont, once lamented that the nation could conclude the Vietnam War simply by saying: “Let’s just declare victory and go home.”

The war was going badly, even though American forces were winning on the battlefield. Our victories were overshadowed by protests at home as Americans grieved over the casualties we suffered for a mission that no one at the Pentagon was able to articulate.

Russians are facing possibly the same the dilemma. Their forces invaded Ukraine months ago. The idea was to subdue Ukraine quickly, tossing out the government led by President Volodymyr Zelenskyy and installing a pro-Moscow puppet to dance to the tune called by Russian despot Vladimir Putin.

The Ukrainians are fighting for their survival against Russians who are fighting to soothe the ego of a dictator.

Can the Russians now just “declare victory” the way Sen. Aiken saw many decades ago? It’s all right with me.

I want the bloodshed to end. I am sickened by the destruction brought to Ukraine. I am heartened, though, by the courage that Ukrainians are demonstrating — under Zelenskyy’s leadership — in fending off the invaders.

As for Putin’s possible victory declaration, I want to stipulate that none of that would preclude an international trial on charges of war crimes being leveled against this monstrous tyrant. By any measure one can make that charge against Putin, given that his forces have struck soft targets — schools, hospitals and apartment complexes — in direct violation of the Geneva Accords meant to govern the rules of war.

Let the bastard declare victory and then then commence a trial to convict him of crimes against humanity.