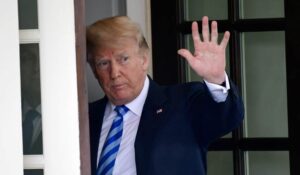 Donald J. Trump used to relish hearing crowds chant “Lock her up!” when the issue turned to how Hillary Clinton handled her email operation during her time as secretary of state.

You’ve seen the video of the Republican presidential candidate just letting the cultists go on and on. Right? Sure you have!

Well, what do we have now? We have reports that as a lame-duck POTUS, the White House hauled 15 boxes of classified information out of the presidential residence and sent them to Mar-a-Lago, Fla.

The Justice Department is now in the midst of an investigation into whether someone broke the law when The Donald exited Washington for his glitzy resort. Hmm, do ya think?

Donald Trump was the most ignorant imbecile ever elected to the nation’s highest office. He had no respect for the law or the secrets he took a solemn and sacred oath to protect.

I am left to simply shake my head and to wonder whether I should lead a chant of my own to “Lock him up!”