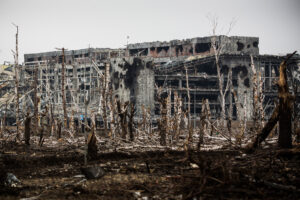 Those of us who can recall earlier conflicts between nations can remember a time when civilians lost their lives when military machines attacked unarmed targets indiscriminately.

Then the rules changed — supposedly — when the Geneva Convention adopted prohibitions against hitting “soft” targets. Nations would (more or less) follow those restrictions.

Now we have the horror unfolding in Ukraine. The carnage and destruction brought by Russian missiles, artillery shells and bombs on apartment complexes, schools, hospitals, houses of worship is beyond the pale.

The scenes being televised around the world of entire neighborhoods in Mariupol leveled by Russian ordnance should fill any of with rage.

Ukrainian forces repelled Russian invaders in their effort to take the capital city of Kyiv. The Russians pulled back, reorganized and have begun an all-out assault on the eastern and southern portions of Ukraine. The armed forces under Vladimir Putin’s command have acted in a throw-back fashion, reminding many of us of the brutality inflicted throughout Europe and Asia during World War II.

In this era of “smart bombs” and precise targeting of military installations, seeing the images from Ukraine should serve as a graphic reminder that Russia is governed by a monster masquerading as a world leader.