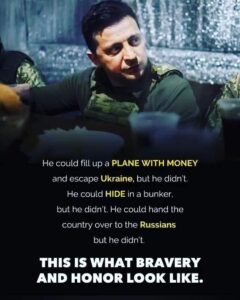 You know, some things do not need to be embellished with prose and platitudes.

This social media meme is one of those things.

Volodymyr Zelenskyy has stood tall against the Russian onslaught against his nation. Think for just a moment what this young man was doing before he became the leader of a sovereign nation that once was part of the Soviet empire.

He was a comedian and an actor. He pranced around movie sets acting like some sort of goofball. Then he got elected president of Ukraine. He became the focus of an impeachment trial of a former U.S. president.

Now he is facing down the military force of Russia launched against his country for reasons that defy explanation.

Yep. The young man is a hero.