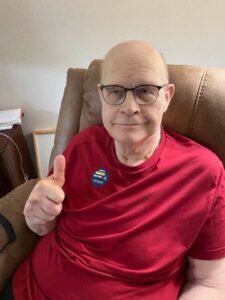 We all have people who come into our lives and never really leave us, even if we no longer see them regularly. They are work colleagues, or those with whom we establish a sort of sibling-like relationship.

Ben Hansen filled both roles in my life. I got some heart-shattering news this morning, that Ben had died peacefully during the night.

I am trying to collect my thoughts and reel in my emotions as I bang out this post. Suffice to say, Ben Hansen — who was a physically imposing man — cast a large shadow over my life and over the communities he served as a newspaper editor in four states over many decades.

Our paths crossed the first time in early1977. Hansen was editor of a suburban daily newspaper in Oregon City, Ore. He had a position to fill on his staff; it was a temporary slot as a sportswriter. The sports editor of the newspaper had taken maternity leave, so Ben needed someone to pinch hit while she was away. I got the job, knowing it could end several weeks later.

Well, it didn’t. Another opening came up. Hansen hired me on a permanent basis. He helped launch my career then. He would leave the paper to take another editor’s job in Utah. After that, he gravitated to Beaumont, Texas.

That’s where our relationship took off. He called me one day to ask if I would like to interview for a job as an editorial writer for the Beaumont Enterprise. I flew to Texas for that interview; he hired me again. Ben told me that the Golden Triangle was a hotbed of news. He was so right.

Ben promoted me to editor of the opinion page. We raised a hackle or two on the editorial page of the Enterprise over the years. I was proud to be part of that effort. I reported to Hansen for nearly 11 years in Beaumont before I departed for the Texas Panhandle.

Ben and I stayed in touch, even after he left Beaumont for another editor’s gig in Prescott, Ariz., where he eventually retired.

I learned much about my craft from Ben. He was a stickler for “active-voice” writing. He despised text that contained “passive-voice” narrative; you know, the kind of the thing that would tell you that “mistakes were made.” He insisted that an active voice required you to say that “so-and-so made mistakes.” Even to this day I am keenly aware of that and seek to avoid lapsing into passive voice when I write this blog.

Ben Hansen was a good and decent man who saw himself as a crusader. He was quick with a quip and could knock out a nearly spot-on impersonation of John Wayne with barely a provocation.

I will hold him in my eternal gratitude for taking a chance on a young man seeking to start a career in print journalism. It worked out well for me and I owe much of what I was able to achieve to the patience he showed me decades ago.

I will miss my friend.