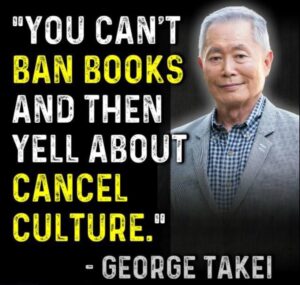 As a general rule I don’t usually quote “Star Trek” actors to buttress a point I want to make, but this one attributed to Mr. Sulu seems to ring so very true to me.

GOP politicians in Texas and everywhere else keep raising hell about “cancel culture” politics they allege are espoused by progressives. You know how it goes: Someone finds a phrase or a term to be offensive, so they set out to blot that from our vernacular; “cancel culture” has resulted in the bringing down of Confederate memorials honoring traitors who sought to topple the U.S. government during the Civil War.

The right wingers among us just can’t stand that notion.

And yet … they seek to ban books that teach students about racism in our nation’s history, about slavery and about certain damning chapters in the building of our nation.

Isn’t that more than just a little hypocritical?