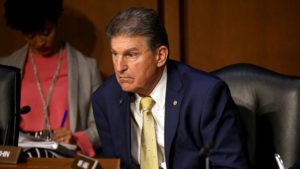 Joe Manchin must think he is the smartest man in politics this side of Donald J. Trump. He knows more than the West Virginia residents he represents in the U.S. Senate.

Why else does he oppose President Biden’s Build Back Better package, the one supported by most West Virginians? Does he know something no one else on Earth knows? Does he really represent the individuals who elect him every six years to the Senate?

Manchin told a TV interviewer today he’s a “no” vote on the $1.7 trillion social spending bill that Biden wants the Senate to approve. Manchin, a Democrat, said he wants to concentrate on COVID-19 relief. Plus, he told “Fox News Sunday,” the national debt is too big, that the BBB bill would add too much to the debt.

Does this signal the death of Build Back Better? No, it doesn’t. Joe Biden is likely to tinker with it — some more. The president doesn’t exhibit any inclination I can detect that he will dig in on every single nickel and dime.

He wants a legislative triumph to go along with the infrastructure bill that Manchin managed to support.

As for the senator from West Virginia, my sense is that he is relishing his fame as a deal-breaker. Never mind all those doggone public opinion polls that tell him his constituents would benefit from the legislation he opposes. He is digging in. A 50-50 Senate split means curtains for the package if Manchin’s resistance holds up.

Yes, I get that West Virginia voted overwhelmingly for Trump in 2020. The former POTUS, though, is on the sidelines. The here and now tells me that Sen. Manchin would do well to listen to what his constituents want. I sense that it isn’t to crush this deal.