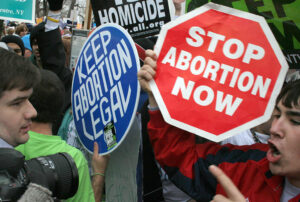 My gut is rumbling, my trick knee is throbbing and I don’t like the feel of any of it as I ponder what might occur down the road with the U.S. Supreme Court’s pending decision on whether to restrict abortion.

Justices have heard from both sides in a Mississippi case involving a law that bans abortion after 15 weeks or pregnancy. It’s not as strict as Texas’s ban after six weeks, but is way more restrictive than the Roe vs. Wade decision that is at the heart of all this talk.

Roe is the case involving a Texas woman who filed suit in 1973 over abortion. The SCOTUS then issued its landmark ruling that legalized abortion, saying it is protected under the U.S. Constitution’s right of privacy provision.

Roe is being challenged directly and the chatter today suggests that the high court, with its 6 to 3 conservative majority is poised to limit abortion — if not make it illegal.

Oh, brother. No matter what the court decides, I am going to proclaim that it won’t end abortion. Women will continue to get them by any means necessary, which makes a potential ban on the practice so dangerous.

I consider myself to be pro-life, which I don’t believe supersedes my equally held belief that government should not dictate how a woman can manage her body. Could I counsel a woman to get an abortion? Absolutely, categorically and unquestionably no! However, nor do I believe that anyone in government has any right to tell a woman she must carry a baby to full term.

The Texas law makes no exception for a woman impregnated by a rapist or during an incestuous encounter. If there is anything more cruel and inhumane than that, I have trouble determining what that would be.

Well, the SCOTUS justices now are going to keep their own counsel on this matter. I want them to uphold Roe vs. Wade. I do not expect them to do so. If they allow Roe to be dismantled, then my fellow Americans, we’d all better prepare ourselves for many stories of utter misery, pain and heartache as women end their pregnancies through means that can do them irreparable harm.