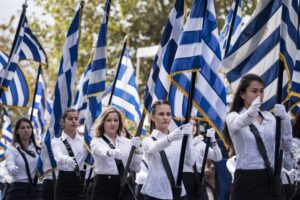 For those who don’t know what “Oxhi” means, it’s the Greek word for “no.” I have provided a rough translation from the Greek.

Oxhi Day is celebrated in Greece, the land of my ancestry, from where my grandparents emigrated near the turn of the 20th century. It’s a day that commemorates an episode in Greek history in which the country stood up to a superior military power and proceeded to kick the stuffing out of it.

On Oct. 28, 1940, Italian dictator Benito Mussolini — who was Adolf Hitler’s hapless ally in the effort to conquer the world — issued an ultimatum to the Greek prime minister, a fellow named John Metaxas. It went something like this: Allow the Italian armed forces to use Greek ports to wage war in Africa across the Mediterranean, or else we’re going to take them over by force.

Metaxas issued a stern answer: “Oxhi!” he said. Mussolini then launched an invasion of Greece from neighboring Albania, which the Italians had already conquered.

The Greek army let the Italian forces enter the country. Then they cut them off at the border and proceeded to slaughter them in the Pindus Mountains. The Greeks, led by the elite Evzone mountain fighters, then drove the Italians out of Greece and back into Albania, where the fighting stalled. Eventually, in April 1941, Hitler decided to rescue the Italians by invading Greece; he conquered the country after fierce fighting.

To Greeks, this is a big deal, as it should be. Mussolini had delusions of grandeur while he sidled up as Hitler’s key European ally. Except that the Italians couldn’t fight their way out of a wet paper bag. The Greek army was supposedly ill-equipped to handle the machinery that the Italians brought to the fight. They did, however, possess plenty of willpower in the effort to prevent Mussolini from conquering Greece.

And so it went. The Greeks had to endure three years of Nazi tyranny before driving them out of the country near the end of the fighting. The Greek resistance was among the fiercest in all of Europe.

Yes, I am a proud American of Greek descent. Happy Oxhi Day … everyone!