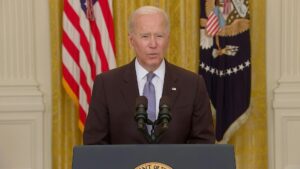 President Biden might have been able to declare some form of victory today had any Republicans had taken part in the negotiation that produced a $1.75 trillion spending bill that appears headed for final approval in Congress.

Sadly, he cannot. Why? Because the Grumpy Obstructionist Party won’t take part in anything pitched by a Democratic president.

I want the GOP to take part in this government, which does involve them as well as Democrats. Instead, Senate GOP leader Mitch McConnell and his House counterpart, Kevin McCarthy, have opted to dig in against the Democrats and the POTUS.

Good government is a team sport. That means, in my view, the whole team comprising members of both parties. Instead, we’re getting a government run by roughly half of the House and the Senate along with the guy who sits in the big office in the White House.

President Biden vowed, in a manner of speaking, to bridge the gap between the parties that grew to enormous size during the administration of Biden’s immediate predecessor. Indeed, the 45th POTUS had no interest or skill in bridging that gap. Biden, at least, brought considerable legislative experience to the White House.

He has yet to bridge the great divide. I hope he can get there.

One thought on “Unity? Far from it!”