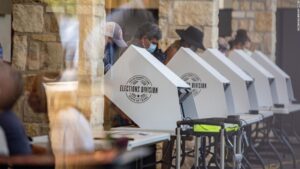 Those who adhere to the cult beliefs of the 45th president of the United States keep telling us that the will and wishes of “74 million American voters” should not be ignored.

OK. I get that. More than 74 million voters cast their ballots for the guy who finished second in the race for the presidency in 2020. That is the second-greatest vote total ever recorded; the greatest vote total was rolled up by President Biden, who pulled in more than 81 ballots.

And, yes, they were legitimately cast ballots.

So, to the sore losers who cannot accept that their guy finished second in a two-man for the presidency in 2020 I say only: Get the fu** over it!

They won’t. Not as long as their cult hero continues to foment The Big Lie about vote fraud and insist that even with all the “forensic audits” he is demanding that he still won the 2020 election.

There have been many photo finishes over many decades of presidential elections. Richard Nixon lost to John F. Kennedy by 100,000 votes in 1960; he accepted the result and moved on. Al Gore lost to George W. Bush in 2000; that election wasn’t settled until the Supreme Court stopped a recount in Florida with Bush leading by 537 ballots; Bush was awarded the state’s electoral votes and he took the oath … after Gore conceded defeat and pledged his support of the new president.

The yammering that continues to this day about POTUS 45 collecting 74 million votes ignores the obvious, which is that his opponent received 7 million more votes and won the election!